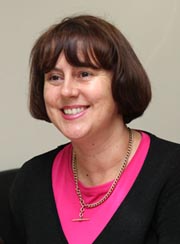 In 1950, pastor Robert Pierce founded a Christian relief organization in the U.S. for orphans in Korea.

Sixty years later, Pierce’s organization, World Vision, is one of the biggest nongovernmental organizations for relief and development globally, with an annual budget of over $2.5 billion and operations in 97 countries.

Korea has now come full circle, from being a recipient of aid to a country rich enough to host the G-20, according to Catherine Boomer, World Vision International’s director of external relations.

During a one-on-one interview with the JoongAng Daily, Boomer said that Korea, as a country that made such significant strides from poverty to prosperity, now has the opportunity to be a bridge builder between all of the parties that will be sitting at the table during the G-20 Summit this year.

Boomer visited Seoul last week to participate in World Vision’s G-20 Working Group conference, which gathered the organization’s leaders from the G-20 countries to discuss what they will ask of their respective governments to support international welfare and relief efforts.

“This is the first time that the meeting [G-20 Summit] is being held in an emerging economy. There is a possibility for Korea to lead the setting of the agenda - always the prerogative of the chair. President Lee has said that he wants to look at closing the gap between developing and developed countries - that’s something that World Vision warmly welcomes,” she said.

Boomer said that Korea is the fastest growing office for World Vision worldwide.

“There is something like 400,000 supporters in Korea. It has grown enormously in recent years,” she said, adding that “because Koreans themselves feel grateful for the prosperity they are beginning to experience, they have a strong sense of wanting to give back and to be good international citizens.”

Young people in particular, have been the core group leading World Vision’s growth over the years. Around 40 percent, the biggest portion of World Vision’s funding, comes from donations from its supporters and sponsors.

“People want to do something more active nowadays than just giving money. They want to participate in more personal ways,” Boomer said. For young people, there are now various ways to become active.

“Engage in advocacy activities through things like social media including Facebook, YouTube and others. There are actions you can take by signing a petition calling on world leaders to act. There is a video competition operating in Canada for the best YouTube video on our Child Health Now campaign.”

According to Boomer, the main focus for the organization this year is maternal and child health.

“The main message we have for maternal and child health is that nine million lives are lost each year from easily preventable causes like malaria, diarrhea and pneumonia. The solutions are known and they are not expensive and are achievable,” she said.

“What we need to see from our leaders at the G-20 Summit is the political will to take action to address this issue.”