An officer returns to the North

An officer returns to the North 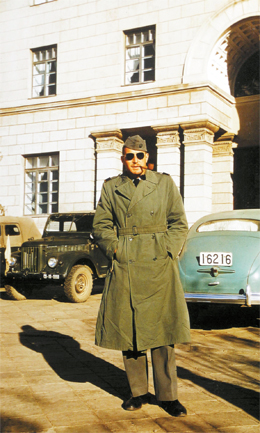 Hans Siever poses in front of a hotel in Pyongyang during his visit to the city in November 1956. [JoongAng Ilbo]

When Hans Siever, 70, returned to North Korea on a recent visit, his third in 54 years, he found to his dismay that little had changed.

“North Korea is as destitute as it was half a century ago,” Siever said. “South Korea has advanced greatly over that period, but it appears the North Korean administration has not changed much.”

He described the state of North Korea as “so bleak that it was just staggering.”

A citizen of Switzerland, Siever was once an officer at the Neutral Nations Supervisory Commission. The commission was established to regulate relations between the two Koreas at the end of the Korean War (1950-1953). It is composed of officers from neutral nations, or those nations whose combat forces did not participate in the Korean War, including Switzerland, Sweden, Poland and Czechoslovakia. 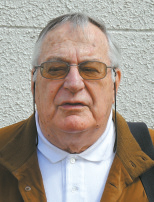 Siever served on the southern side of the Joint Security Area, or Panmunjom, for 10 months beginning in January 1956, shortly after the Korean War ended with the Korean Armistice Agreement signed July 27.

Siever visited North Korea last month as one of a five-member Swiss delegation that toured Pyongyang, the capital of the reclusive regime; Kaeseong, the site of the inter-Korean industrial park; and the JSA.

“Propaganda structures such as statues of Kim Il Sung and Kim Jong-il were built, while the citizens literally had nothing to eat. It didn’t make sense to me,” he said. “If the North Korean government adheres to such a stance, unification is not likely to happen in the next generation.”

Siever added that as a soldier who served here, he was proud of the economic advancement South Korea has achieved since the war.

Siever’s experience as a member of the Neutral Nations Supervisory Commission can be likened to that of a character in “Joint Security Area,” an award-winning film made by Park Chan-wook in 2000.

The film was about an investigation into a fatal shooting incident within the DMZ, the heavily fortified border that separates the two Koreas. In the film, actress Lee Young-ae plays Swiss Army Major Sophie Jang, an investigator from the Neutral Nations Supervisory Commission.

Siever said that he met North Korean soldiers defecting to South Korea several times during his service at JSA.

“I remember when I was resting at the barracks, soldiers would come knocking saying that they would like to live in the South. I took them to the U.S. military police and helped them take the necessary steps to defect.”

He also recalls being there in the aftermath of the North Korean shooting of a U.S. plane in 1956.

“North Koreans returned the remnants of the plane and the bodies of the pilots through the JSA,” he said. “It was a horrible incident.”

While Siever’s 10-month experience in Korea was just a short part of his life, he still follows news pertaining to Korea with great interest.

“Ever since my service at JSA, I’ve closely followed any news related to Korea,” he said.

He said that he has also been following the developments in relation to the South Korean Navy corvette Cheonan, which sank in March south of the inter-Korean border in the Yellow Sea, adding that he hopes the South Korean government and people will respond with discretion.