Military measures on the table

Military measures on the table 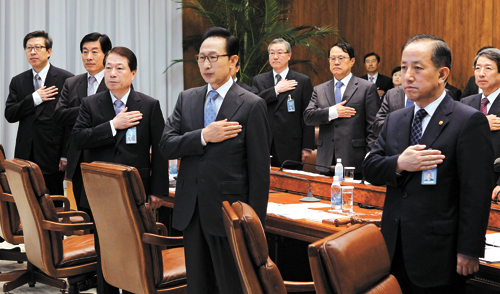 President Lee Myung-bak, meanwhile, called for a “prudent” reaction to the “grave” situation, and South Korean and U.S. forces mulled over raising their alert level on North Korea.

In a press conference yesterday, Defense Minister Kim Tae-young called North Korea’s denials “preposterous” and described the attack as “an act of brutality.” He said the South was consulting with other nations to create “military and non-military countermeasures.”

“Since the Koreas are under an armistice and still technically at war, problems may arise,” Kim said. “But there must be limits to the degree of hostile action. Our government will make sure North Korea pays dearly for what it’s done.”

Kim did not elaborate on what the military measures might entail, but said the South’s “firm” steps would include raising the Cheonan case at the United Nations Security Council, which could resolve to levy international sanctions on North Korea.

He also said the South Korean and the U.S. military are reviewing the possibility of elevating the five-level Watch Condition, or Watchcon, alert on North Korea by one notch, to Level 2.

Under a Level 2 alert, which indicates the presence of a vital threat against national security, South Korea and American forces would step up their intelligence and reconnaissance efforts.

The Watchcon in South Korea is usually kept at Level 3, which indicates a steadily rising threat that warrants careful monitoring, because of the potential threat from the North. The South has lifted the Watchcon to Level 2 on five previous occasions, most recently in May 2009, when North Korea conducted its second nuclear test.

Level 1, the most serious alert, has not been issued since the Korean War ended in 1953.

Kim said the Defense Ministry has asked the United Nations Command to investigate whether the North’s action violated the 1953 Armistice Agreement, as both the White House and South Korean President Lee Myung-bak have charged.

The Military Armistice Commission, under the UN Command, is expected to form a special investigative team to look at the issue and begin its probe as early as this weekend, Deputy Defense Minister Jang Kwang-il said yesterday. According to Jang, if the team determines that North Korea breached the terms of the Armistice Agreement, it will issue a formal complaint to the North and send its findings directly to the United Nations.

The Defense Ministry sent a dispatch to North Korea yesterday, urging its military representatives to attend the meeting with the UN Command to discuss the armistice commission’s findings.

Meanwhile, chairing an emergency National Security Council meeting yesterday, President Lee stressed the importance of a prudent response. But he also said the Cheonan attack “can be regarded as a military provocation that constitutes a violation of the UN Charter, the Armistice Agreement and the Inter-Korea Basic Agreement.”

A violation of the UN Charter would subject the North to Security Council sanctions. Its Chapter I, Article 2, Clause 4 states, “All members shall refrain ... from the threat or use of force against the territorial integrity or political independence of any state.”

The Inter-Korea Basic Agreement is a 1991 pact between the two countries calling for non-aggression and reconciliation.

North Korea yesterday remained defiant. Through a statement by the Committee for the Peaceful Reunification of the Fatherland, the North said the Korean Peninsula has entered a “phase of a war” and warned it was prepared to scrap all agreements with the South.

Repeating its denial of responsibility for the Cheonan sinking, North Korea said the conclusion that identified Pyongyang as the culprit was a “ridiculous charade.”

“If the South puppet group comes out with ‘response’ and ‘retaliation,’ we will respond strongly with ruthless punishment including the total shutdown of North-South ties, abrogation of the North-South agreement on non-aggression and abolition of all North-South cooperation projects,” the statement read.

The North also claimed yesterday it would send a team of inspectors to South Korea this weekend. It had said Thursday that it wanted its own officials to double-check the evidence submitted by the international team of experts who concluded that the North sank the Cheonan.

“It’s akin to a murderer asking to examine the scene of the crime himself,” Kim said. “It’s absolutely nonsense.”

Her visit there is expected to focus on the debate over the fate of a U.S. base on Japan’s southern island of Okinawa, which the United States insists is the key to maintaining stability in the Asia-Pacific region.

Following her Japan trip, Clinton will meet Chinese leaders on Monday, and expected topics include the North’s provocation.

She will end her regional trip in South Korea on Wednesday.


President Lee Myung-bak, second from right in the front row, leads the pledge of allegiance as he chairs an emergency national security meeting at the Blue House yesterday to discuss South Korea’s response to the North’s torpedo attack. [YONHAP]