On the job, and training

On the job, and training 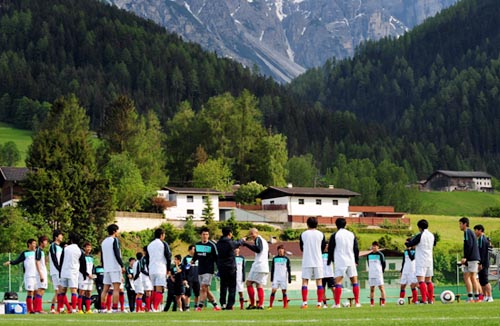 “I feel good. We are headed in the direction we had set out,” Huh said. “The two friendlies [against Belarus and Spain] will provide us with a better outline of what we can expect to see against Greece.”

Huh has put fun and sports science at the core of his 10-day camp at the Kampl training center in Neustift im Stubaital, Austria, and he said it’s putting his team on the right track as they prepare for their opening match of the 2010 South Africa World Cup against Greece on June 12.

“Bringing out the best in our players cannot be forced. It must take place naturally, over time,” said Huh. “That’s not to suggest that our players should be lax in their approach.

“One must always keep results in mind when taking on challenges. Winning makes challenges fun.”

Huh and his 26-man preliminary squad will face off against Belarus on June 30, kicking off at 3 p.m. It’s the last friendly match before the June 2 (Korea time) FIFA deadline for the final 23-man roster. Huh intends to use all the players at his disposal against Belarus, which ranks 82nd in the world against Korea’s 47th. Belarus posted a record of four wins, one draw and five losses in a regional qualifier against the likes of England, Ukraine and Croatia.

So far, just one player has been scratched from the Korean lineup: forward Lee Dong-gook, who is recovering from a slight tear to his right hamstring he suffered in the May 16 friendly match against Ecuador in Seoul. Some of the younger players on the bubble and those competing for a spot in the starting lineup will be given one last chance to impress the coaching staff.

“We’ve already sought our opponents’ consent and we will use as many substitutes and incorporate as many strategies as possible,” said Huh.

As he did in past overseas training camps, Huh has put players competing for starting spots - such as right backs Cha Du-ri and Oh Beom-seok, and central defenders Kwak Tae-hwi and Lee Jung-soo - together as roommates. The manager hopes this will get the players’ competitive juices flowing and in turn increase the level of competition and overall quality of the training camp.

Sports science is another big part of Huh’s philosophy. At the training camp, players were fitted with electronic vests and 12 wireless censors were set up around the training grounds. The vests keep tabs on the players’ movements and speed, heart rate and recovery time, among other things. The compiled records give the coaching staff a complete record of each player’s physical condition, and lets them tweak training methods to maximize their player’s conditioning.

The players are getting some Korean home cooking, too, in addition to supplemental vitamin and protein drinks.

“I’m not concerned about the conditioning of my players. We’re working hard to get another tune-up match in our schedule before the start of the World Cup,” said Huh.