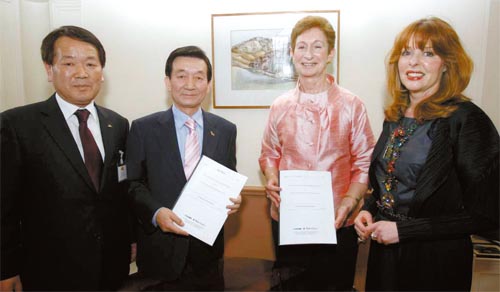 Jeju, known as a Korean honeymoon and school trip destination, is now transforming itself into a splendid center for international business, education, health care and tourism like Singapore or Hong Kong. In 2006, the South Korean Government designated the island province of Jeju, which is only a two-hour flight from five major cities in Asia including Seoul, Beijing, Shanghai, Hong Kong and Tokyo, as the only special self-governing province in the country. This special designation gives Jeju full autonomous rights and authority in all areas except national defense, diplomacy and the administration of justice, and allows Jeju to open itself to the world through a no-visa policy and tax exemptions for Koreans and foreign investors. This designation has also allowed the Jeju Free International City Development Center to take on six economic development projects totaling $5.1 billion, including two projects that focus on some of the world’s most pressing issues - access to world-class events and ideas with affordable education and health care.

The plan to develop a first-of-its-kind Global Education City became more visible with the recent signing of an MOA with North London Collegiate School, which was ranked the number one IB school three years in row by the Financial Times. Such progress is expected to attract the attention of other international institutions as Korea is a proven market, especially considering the number of Korean students at schools in the United States and other English-speaking countries. More than 12 English-only primary, middle and high schools will be established in the City, with English the only language spoken at public offices, shopping centers and parks. An English-speaking town will be equipped with residences, commerce and convenience functions, as well as educational facilities, in order to absorb demand for overseas language courses and offer the chance for English education to middle-class families. The goal is to provide world-class quality and an affordable education to Asian students. The budget is approximately $1.4 billion.

“We know that in today’s global economy, English language proficiency is a vital skill for professionals all around the world,” said Kim Tae-hwan, governor of Jeju Special Self-governing Province. “Until now, many families have faced significant economic hardships in sending their children to schools that provide a quality English education, and in Korea, in many cases, there simply have not been enough schools to meet the rising demand of middle-class families for this type of instruction. We think this project will meet local needs and provide multilingual professionals for corporations all around the world.”

In addition to the Global Education City, JDC is also planning to begin construction of a state-of-the-art health care complex in late 2010. JDC has recognized that people from around the world are becoming savvy health care consumers - looking for the best treatment, in the best location, for the best price. Jeju’s Healthcare Town will offer medical tourists a variety of health and treatment options, ranging from medical examinations to obesity treatments to wellness therapies. The complex will also be home to a research and development park, which will include a National Anti-Aging R&D Center, Bio Medical R&D Center and New Medicine R&D Center. 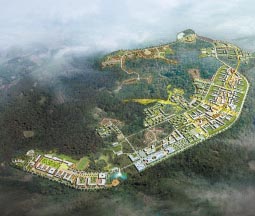 An artist’s rendering of the Jeju Global Education City.

Healthcare Town is expected to provide significant economic benefits for Jeju over the long term. According to McKinsey and Company, medical travel market gross revenues were $60 billion worldwide in 2007 and are projected to grow to $100 billion by 2012. In line with the growth of the global market, Korea’s medical tourism sector aims to attract 850,000 tourists by 2015. The Healthcare Town will cost about $614 million to complete.

“Health care is no longer simply a regional issue,” said Byon Jong-il, CEO and chairman of JDC. “The medical travel market is growing rapidly every year, and we believe that our international medical facilities, which focus not only on medicine but also on wellness, will be among the best in the world. Every person should have the right to receive cutting-edge health care at a fair price.”

The Jeju Science Park, the first completed of JDC’s six projects, opened in March. With cutting-edge knowledge-based businesses such as IT and BT, including national projects such as a smart grid complex and a telematics complex, the Jeju Science Park will drive economic growth on Jeju Island to meet 21st-century needs.

“To promote Jeju Science Park as part of JDC’s basic infrastructure and position it as an influential international science park, we will build clusters of domestic and international enterprises, local universities and organizations as well as create strong networks with well-known science parks abroad,” said Byon.

Jeju has also boosted its traditional industry - tourism - with the Berjaya-Jeju resort and the Myth and History Theme Park. The former, a resort-type residential complex currently under construction, is the largest foreign investment, at $1.8 billion, by Malaysia’s Berjaya Group and will be completed by 2015. As the potential for Chinese investment in Jeju has increased recently and with a recent visit by a group of Chinese investors, contracts for 58 resort-type houses in Raon Private Town have also been initiated. The Berjaya-Jeju resort is expected to become the next target of Chinese high net-worth individuals seeking valuable investments abroad. As Asian countries are poised to establish new infrastructure and provide facilities and services to meet rising demand in the region, Jeju plans to establish the Myth and History Theme Park, designed to let visitors experience the cultures and legends of countries across the globe. It will also include the only MGM theme park in Asia. This theme park is expected to be completed in 2014 and will feature culture and entertainment from South Korea, China and Southeast Asia.

The goal of Jeju, to be a Northeast Asian hub of business and tourism, has already materialized. “JDC’s projects are showing strong potential with Jeju Science Park’s opening and North London Collegiate School’s Jeju Campus under construction. With Jeju’s unique world heritage and amazing natural environment, it will become an international hub for business and tourism surpassing Singapore and Hong Kong,” said Byon.