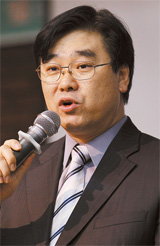 A former member of the team that investigated the sinking of the Navy warship Cheonan is now under investigation himself for allegedly spreading false rumors about the incident.

Prosecutors yesterday called in Shin Sang-cheol, who runs the Internet political magazine Seoprise, to answer questions. Shin joined the investigative team of military and civilian experts at the recommendation of the Democratic Party, but the National Defense Ministry asked the National Assembly to replace him for reportedly arousing public mistrust in the probe’s results while rarely joining in the team’s investigation.

According to the Seoul Central District Prosecutors’ Office, Shin made claims that challenged the team’s conclusion that the Cheonan was sunk by a North Korean torpedo attack. Shin has repeatedly claimed that the sinking was just an accident, and that the South had tampered with evidence to blame the North.

Navy officials filed a petition on May 18 asking prosecutors to launch a probe, claiming that Shin had defamed the Navy by spreading false information.

Prosecutors said they were questioning Shin about the grounds for his argument.

“As a member of the probe team, I made my conclusion based on my experiences and knowledge,” Shin said on his way to questioning yesterday.

Shin studied oceanography at Korea Maritime University and was commissioned as a Navy second lieutenant. He was discharged from active duty as a first lieutenant after serving on a patrol boat in the Yellow Sea. Following his military service, he worked seven years for shipbuilders. Since 2004, he has worked for the progressive Internet political magazine.

Shin has often made public his opinions about the Cheonan’s sinking. He once claimed that the ship collided with another vessel. Lately, he has said he believes that the South tampered with evidence by marking the salvaged propulsion unit.

The marking “1 beon” (“No. 1” in English) written on the shaft was one piece of evidence that led investigators to conclude that the torpedo was a North Korean weapon.

“I think we marked the 1 beon,” Shin said Wednesday in a lecture he titled “Can we trust the Cheonan probe outcome?”

“The magnified photo of the evidence showed that the marking was written on the rusted surface,” he said. “If it were the North who marked it, the marking should have been written on a smooth surface.”

The investigation into Shin is not the first of its kind. On May 7, the Central District Prosecutors’ Office began a probe into Park Sun-won, former President Roh Moo-hyun’s secretary for national security, on charges that he spread false information about the sinking. Park, a Northeast Asia energy and security visiting fellow at the Brookings Institution who served as an adviser for a Democratic Party committee on the Cheonan investigation, said in an MBC radio interview in April that the Lee Myung-bak administration was concealing information about the sinking.

Meanwhile, Prime Minister Chung Un-chan ordered the government to come up with a measure to stop the widespread rumors surrounding the Cheonan’s sinking.