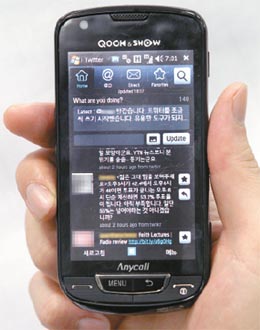 POWER IN YOUR POCKET: Voter turnout went up in the afternoon because of tweets

Social networking services, such as Twitter, may have played an instrumental role in producing a surprise victory for the opposition in the local elections on Wednesday, according to election observers and IT industry analysts.

Voter turnout in the election at 54.5 percent was the highest in 15 years, and analysts said that the surge was due to Twitter messages exchanged among young voters who flocked to the polls after being urged to do so by friends and celebrities.

Hwang Ju-hee, 26, was one of those who decided to vote after receiving text messages saying that “votes from the young generation are crucial.” Hwang, who works in Seoul, had initially decided not to return to her hometown in Gimhae, South Gyeongsang, where she was registered to vote, to cast her ballot. But she changed her mind after she saw the text messages.

Opinion leaders and TV celebrities joined in the text messaging, urging a turnout of voters. Some of them sent pictures of themselves at polling stations.

Star novelist Lee Oi-soo, who has some 167,000 followers of his Twitter account, tweeted at 11 a.m. on Wednesday saying, “If you give up your right to vote, it is as worthless as trash.” Actress Park Jin-hee and singer Kim Hee-cheol also sent messages and pictures on their Twitter accounts to encourage people to vote.

Song In-hyeok, a 34-year-old office worker, sent similar messages to around 30 acquaintances. “As I saw those texts, I felt a sense of responsibility and felt that I should join in, too,” he said.

Figures show that voter turnout rose notably as the day progressed and votes for the opposition Democratic Party increased significantly in the afternoon hours.

Election experts say this is very reminiscent of the 2002 presidential election when Roh Moo-hyun had a landslide victory over conservative Lee Hoi-chang. Roh’s victory is seen as partly due to Internet support from young liberal voters.

According to New York-based Internet market researcher eMarketer, two-thirds of all Internet users in U.S. will be using social networking Web sites by 2014, increasing the potential that social media will not only be a venue for networking but also forming public opinion.