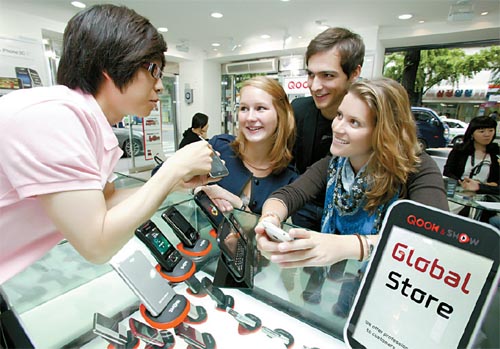 Expatriate customers get information on KT’s new foreigner-friendly service at a KT branch in Sinchon, where service is available in 17 languages. Provided by KT

As the number of expats choosing to live in Korea increases, businesses have begun to reorganize their target markets with marketing campaigns and service plans especially for foreign nationals.

The number of foreign nationals exceeded 1.1 million as of August last year, which is a 24.2 percent increase compared to the previous year, according to data from Statistics Korea.

KT, Korea’s second-largest mobile carrier, announced at the end of last month that it will allow more foreign nationals to become registered customers, which will make them eligible for various discounts.

There are stores catering to foreign nationals in Itaewon, central Seoul, and Ansan, Gyeonggi, where the expat population is high. Service at these locations is available in 17 languages including English, Japanese and Chinese. Phone service is also available at (02) 2190-1180.

To make it easy for foreigners to manage their finances, banks are making more products available to foreign nationals.

Woori Bank launched the Woori V check card for foreign nationals last month. Korean Exchange Bank is considering allowing foreigners to apply for an “e-pass,” a check card that also functions as a metro card. The cards would offer discounts and point awards at retail stores frequented by foreigners, such as Lotte Mart and Home Plus.

The bank launched the cards after it had 100,000 new foreign customers apply for credit cards exclusively for expats in 2005 and 2008.

Meanwhile, I’Park Mall Culture Center in Yongsan is offering a series of new classes catering to foreign children that are taught in English. One of these is a ballet class for children ages five to seven whose parents are foreign nationals. The class started last year after more than 20 children signed up for the 10 available spots in a demo class.

“We have opened up more classes that target non-native Korean speakers. But since Korean parents want their children to mingle with children who are native speakers of English, we also keep these classes open to Korean children. This way, expat children can also get to know local children,” Choi Soo-min, director of the I’Park Cuture Center, said.

In addition, the public sector has established a variety of new programs to help foreigners adjust to city life.

The Seoul Metropolitan Government Office, for example, has launched a project to build a new global center in Jongro. When construction is finished in June 2012, the center will help foreigners with civil affairs.

In the Gangnam area, the city will open a global business support center at Coex in the middle of this month. Foreigners interested in starting a business or who want to invest, but have little capital, can get information on legal issues, authorization processes and taxes.

The city of Seoul is also working to accommodate foreign travelers, and launched the International Taxi program in May 2009.

“The image of Seoul was getting ruined by two things,” Hyun Sang-min, manager of the International Taxi program, said. “First, communication with taxi drivers was impossible since the drivers barely speak foreign languages. Second, foreign travelers have complained about being ripped off since they are not familiar with the Korean taxi meter system.”

Under the program, the drivers are all fluent in English and either Japanese or Chinese and there is a separate meter system for foreign customers. Customers can also make advance reservations by calling 1644-2255. When there is no demand for international taxi from foreign customers, it runs as a regular taxi to serve the citizens.