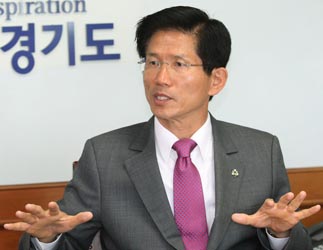 Kim Moon-soo of the ruling Grand National Party was re-elected as the governor of Gyeonggi and promised to govern the gigantic region with a “systematic approach.”

“A governor has no means to control the provincial legislature just as the president has no controlling authority over the National Assembly,” he said in an interview last Saturday. “I plan to establish a new department that will play a role as a channel between me and the local council heads.”

Regarding his electoral opponent, Rhyu Si-min, the former welfare minister, Kim said, “He was the strongest rival I have ever competed against since he is a figure recognized nationwide. I have never gone through an election as hard as this one.” He added that he thinks his victory indicates Gyeonggi residents think highly of his efforts to take care of residents in difficult times.

Q. Why do you think the ruling party lost in the local election?

A. As a matter of fact, I don’t think it did too badly. I actually expected a worse result. As previous elections have shown, the citizens don’t like to see political dominance by one party. But feeling that the Grand National Party would do well was due to false expectations from the Cheonan case and misleading opinion poll surveys.

The Gyeonggi Council is now dominated by the opposition Democratic Party, as are other leaders of local government units.

I’m practical when I face a challenging situation. Of course I will establish new ways to cope with the dominance of Democrats.

A Democrat has been elected Incheon mayor. It seems like you will have problems proceeding with the plan to link Seoul and Gyeonggi with an underground railroad, the top pledge you have made.

If Incheon goes against the plan, I can take out the Incheon-Songdo route. Some 60 percent of Gyeonggi residents want the new transportation network. It will be jointly financed by Hyundai Engineering and Construction, Samsung and Daewoo and state funds.

How do you view the deregulation issue and the Sejong City issue?

I want to abolish many regulations in Gyeonggi so it becomes an Asian hub. I oppose the original plan for Sejong because it would divide the capital city.