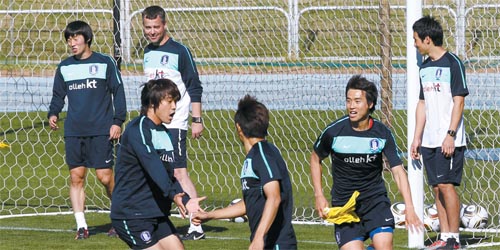 Lee Dong-gook, second from right, chases Park Chu-young, second from left, during a training session at Olympia Park stadium in Rustenburg, South Africa, on Tuesday. National team physical trainer Raymond Verheijen can be seen watching the practice in the background. The national team was given a day off to rest yesterday. [YONHAP]


The national football team’s physical trainer and endurance physiologist is nearing his goal of getting his players in peak shape by the opening match against Greece on Saturday.

“The players are in excellent physical shape,” Raymond Verheijen told Ilgan Sports after a team practice at Olympia Park stadium in Rustenburg, South Africa, on Tuesday. “I’ll have to check the team data later tonight, but we’re close to reaching our goal.”

The 39-year-old Dutchman had not given a clear answer on the national team’s progress on conditioning over the past few weeks, but he looked satisfied with his team.

Yesterday’s practice was the last of the five-week physical training program designed by Verheijen, which started on May 10. The Korean players got the day off to rest yesterday and will relocate to Port Elizabeth, the site of their opening match against Greece, today. National team manager Huh Jung-moo will put his players though light training today and tomorrow.

Verheijen served under Guus Hiddink and Dick Advocaat as the national team’s physical trainer at the 2002 and 2006 World Cups. The 2002 national team members called the Dutchman “The Grim Reaper” because of his grueling training sessions, which included 20-meter shuttle runs or beep tests. He was brought on to help the current squad in January of this year.

“There are many capable players and those with potential. Korean players are hard workers. When you work hard, there’s always a chance for success. Our players can reach world-class physical shape,” Verheijen said at the time. “In 2002, we had we had nine weeks, but we’re being given five weeks this time around. Five weeks is plenty of time to reach a high level of physical condition.”

During the past five weeks, in Japan, Austria and South Africa, the national team players went through rigorous training sessions monitored by Verheijen.

In addition to helping the former Dutch managers who led the Korean national teams, Verheijen served in the same role for the Dutch national team at the Euro 2000 and 2004 tourneys.

The physical trainer said there is a difference between the current team and the 2002 World Cup squad, which advanced to the semifinals because of their energetic play and strong defense.

“It’s a stretch to compare the 2002 squad with the current team. The 2002 team had more preparation time,” said Verheijen. “If I had to compare, the physical condition of the two teams is comparable but the 2002 team was stronger.”

“Two-thousand-two was a special case. The national team at the time spent many months together, much like a professional club. It’s a stretch to compare the current team to the 2002 squad,” said 2002 veteran and current national team fullback Cha Du-ri. “That’s not to say the current players are not in top shape. As you saw in the friendly matches, all the players on the national team are capable of competing at the top level without any problem.”

In 2002 there weren’t many Korean players competing overseas, so the coaching staff had plenty of time to work with their team over an extended period of time. The current squad features a total of 10 overseas-based players, six of whom play in Europe. Huh and the coaching staff had to wait for the professional league season to finish before they could gather all the players for training.

Despite the reduced training time, the 2010 squad got a big boost from Verheijen’s new high-tech system that outfitted each of them with electronic vests. Vital data such as each player’s heart rate, recovery time and movement during practice helped Huh and his assistants make accurate personnel decisions leading up to the World Cup.