Greece gets shot at redemption

Greece gets shot at redemption 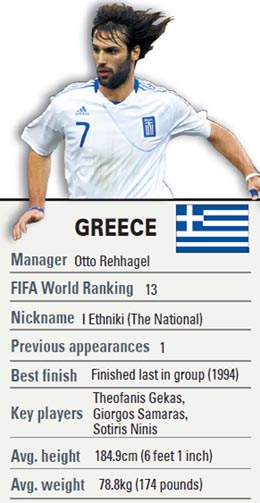 ATHENS - Greece enter their second World Cup determined to avoid a repeat of their appearance in 1994, which ended in utter failure.

The Greeks lost all three group matches against Nigeria, Argentina and Bulgaria, conceding 10 goals and scoring none. It was mocked as the “4-4-2 system,” letting in four goals in the first and second matches and two in the last game.

Fast forward 16 years and Greece are back in a World Cup Group with Argentina and Nigeria. South Korea are their other group opponents.

This time, though, the Greeks are no rookies.

Having stunned the football world with their Euro 2004 victory, Greece have managed to qualify for three of the last four major tournaments, all under the guidance of 71-year-old German coach Otto Rehhagel.

Euro 2004 veterans such as Kostas Katsouranis and Giorgos Karagounis are driven by the thought of crowning their international careers with a successful World Cup campaign.

For gifted younger players like Sotiris Ninis and Sokratis Papastathopoulos it is a chance to show their skills on a stage they could only dream of a few years back.

“Our aim is to have a decent display in South Africa,” said playmaker Ninis, who is said to be a transfer target for several major European clubs. “If we can grab a good result in the first game or even the second then the door is open.”

The current squad is arguably the best Rehhagel has assembled in Greece. Defensive order has been restored after some two years, with Papastathopoulos and Vangelis Moras emerging as Rehhagel’s new “twin towers.”

Their midfield, with Karagounis, Katsouranis and Ninis, is brimming with skill and their front line includes Fanis Gekas, the top scorer in all European qualifying groups, with 10 goals. Moving into the next round would exceed the country’s expectations, but ruling out Greece too early has been risky in the past.

Leading Greece will be forward Gekas. He is ending his fourth season in the Bundesliga with his current club, Hertha Berlin, relegated to the second division. Gekas is often underrated despite a consistently superb goal-scoring record, and his positioning inside the box has led to comparisons with former Germany striker Gerd Mueller.

The 29-year-old is aware time is running out and the World Cup is his last major chance to showcase his goal-scoring instincts to a global audience and get that elusive big-club deal.