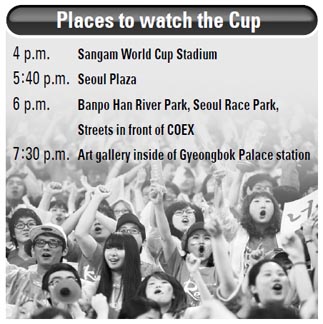 Red Devils in Seoul will have plenty of chances to make their excitement heard when the national football team faces Greece in its first match of the World Cup tomorrow night - the city is giving them a choice of outdoor venues at which they can watch the game and chant “Dae Han Min Guk!” - “Republic of Korea!”

Seoul Plaza and Gwanghwamun were regarded as the most desirable spots from which to cheer during the 2002 and 2006 FIFA World Cups, but this year several other big venues will also accommodate large crowds: Banpo Han River Park, Seoul Race Park, Gyeongbokgung Station, Sangam World Cup Stadium and COEX.

SK Telecom, Korea’s No.1 mobile carrier, will host a concert featuring singers from its commercials at 6 p.m. at Banpo Han River Park, followed by a large-screen broadcast of the game beginning at 8:30 p.m.

Streets between Samseong Station intersection, where the game will be shown on big outdoor screens, and Bongeun Temple will be used as a cheering space. Another free concert, this one featuring the singer Insooni, will brighten the atmosphere at Seoul Race Park in Gwacheon, Gyeonggi, at 6 p.m., before the match begins.

That’s not to say that Seoul’s ritual venue, Seoul Plaza, won’t see its share of fans. SBS, which has the exclusive right to air the World Cup in Korea, will feature a concert at the plaza at 5:40 p.m., and the city government will distribute free bottles of Arisu, the city’s drinkable tap water.

In another effort to show football fans a good time - and encourage street cheering - the city is extending subway hours to 1 a.m. on Sunday and on June 18, after Korea plays Argentina, and until 2 a.m. on June 23, when Korea faces Nigeria at 3:30 a.m.

Traffic will be banned at Seoul Plaza, Cheonggye Stream, COEX and Daehangno on those days, in order to ensure fans’ safety, the government said.