With Argentina ahead, Korean team confident

With Argentina ahead, Korean team confident

The Taegeuk Warriors are brimming with confidence and like their chances against their next opponent, Argentina. Entering the 2010 South Africa World Cup with the goal of reaching the round of 16 for the first time away from home, the Korean national team kick-started their campaign with a convincing 2-0 win over Greece in their opening match in Port Elizabeth, South Africa, on Saturday.

Lee Jung-soo opened the scoring for Korea, but it was captain Park Ji-sung’s play that stood out. Park, who scored the second goal, was named the man of the match for his effort and sounded eager to pull off a major upset when the team faces Argentina on Thursday. “Argentina is the top team in Group B, but unexpected things happen in football,” said Park.

But Saturday’s results were no surprise for about 200,000 fans who gathered in outdoor venues around Seoul, who had spent hours waiting for the kick-off in heavy downpour. They erupted in a frenzy at the sound of the final whistle, and the festivities went late into the night.

The foreign press had high praise for the Korean team. Argentine daily Ole lauded Korea as the best Asian team, calling it a squad that knows how to overcome its own mistakes. Wire services such as the Associated Press, Reuters and Agence France-Presse said Korea “dismantled” the opposition with play that was “too fast and too smart” for the “lackluster” Greeks. 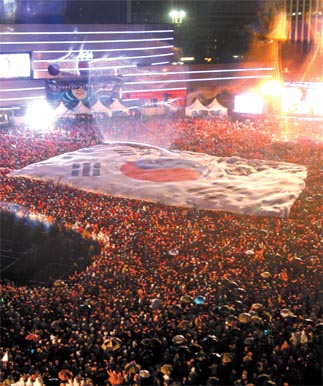 Despite drizzling rain, about 47,000 football fans clad in red shirts gathered to cheer the Korean team on Saturday night at Seoul Plaza in front of City Hall. [Joint Press Corps]

Korean Football Association officials said manager Huh Jung-moo reminded his men not to get complacent before they left the locker room - in part a reminder of the 2006 Germany World Cup, when Korea won its opening match against Togo before crashing out with a draw against France and a loss to Switzerland.

But the players responded boisterously when assistant coach Jung Hae-seong shouted, “Let’s carry this momentum and defeat Argentina in our next match!”

With the win, Huh became the first Korean-born manager to lead his team to a victory at the World Cup. And he’s confident about facing the South American powerhouse on Thursday. The top-ranked team, led by Lionel Messi and a slew of world-class talent, showed its caliber in its 1-0 opening match against Nigeria Saturday.

“This is only the start. My team played well, we prepared thoroughly, I’d like to congratulate them,” Huh told AFP. “It’s win No. 1, but we have to continue to grow. My heart is filled with happiness, now we have to prepare for the next game.”