A STRATEGY BEGINS TO FORM
Human face even for the enemy

Last week, General Paik related the rush to form a defensive line at the Nakdong River, and his promotion to brigadier general. 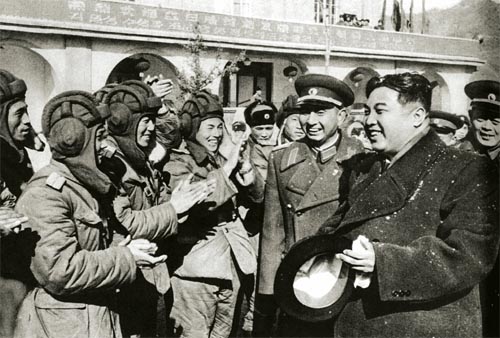 Kim Il Sung, far right, attends a farewell ceremony for Chinese People’s Liberation Army troops returning from their tour of duty. Leading the war personally in the early stages, an anxious Kim traveled as far as Suanbo, North Chungcheong, on July 20, 1950, to direct his troops. Provided by Gen. Paik Sun-yup

The situation at the Nakdong line during the summer of 1950 was nothing short of intimidating. The enemy Infantry 3rd Division, which had penetrated the U.S. Infantry 24th Division’s defense, was now attacking our front lines.

The North Korean Infantry 3rd Division was to lead the offensive in Dabu-dong. To make matters worse, the enemy’s Infantry 15th and 13th Divisions, which had passed though the Ihwaryeong and Choryeong areas of North Gyeongsang, had joined the 3rd Division.

The ROK 1st Division, which was in charge of holding the Nakdong line, barely numbered 9,000, and that was including the ROK 5th Division, which joined our company during our retreat south. The number was considered inadequate for a single division, but we were given the daunting responsibility of fighting off offensive attacks from three enemy divisions equipped with tanks and artillery.

Part of the strong offensive was due to pressure coming from the top of the command chain. The North Korean leader Kim Il Sung was getting antsy. Soon after the outbreak of the war, when North Korean troops gained control of Seoul, Kim made an appearance in the capital city. However, as ROK troops focused on tactics to delay combat and U.S. troops arrived en masse, Kim could not hide his anxiety. 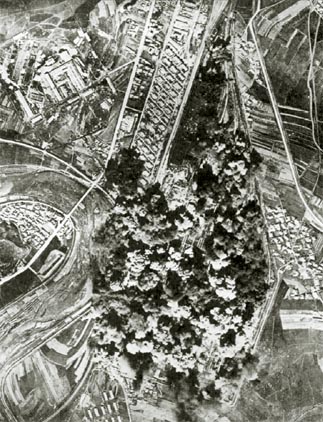 U.S. Air Force bombers destroy a railway repair station in Wonsan, Gangwon at the height of the Nakdong River Battle in late August 1950. Provided by the U.S. Army

Kim was under the illusion that if he started a war, an armed uprising would ensue in the South and the North Korean troops would be welcomed. He also incorrectly bet that the Americans would not get involved in the war. He was eager but still young and inexperienced, and his judgment had been off. Although he had started a full-scale invasion, he did not foresee the consequences his decisions would bring.

After a brief stay in Seoul, Kim rode a Soviet Gaz-67 jeep down the Gyeongbu axial line and came as far as Suanbo in North Chungcheong. He went to encourage his troops and to give the men a morale boost. According to records, Kim reached Suanbo on July 20, just before the U.S. and ROK troops were pushed back to the Nakdong line.

Accompanying him was Kang Kon, the chief of staff of the North Korean People’s Army. Kim Il Sung met there with the front line council.

“Seize Busan by Aug. 15, and let’s finish this effort to liberate Korea,” Kim reportedly ordered. “Let’s make the upcoming National Liberation Day a festival to mark the liberation of the South.”

Kim did not stop there, giving out more specific orders on how the North Korean troops should carry out the attack. He recommended the troops avoid meeting the opposing ROK forces, instead taking detours and making good use of mountain trails so that they could attack the ROK troops from the side and rear.

Kim Chek, who was in charge of the North Korean offensive on the front lines, made his way down to Gimcheon, North Gyeongsang, and tried to carry out Kim’s orders to the best of his ability. The North Koreans were reduced to employing guards to keep their men from deserting. The role of the guards was to shoot and kill any men who attempted to retreat from the front line. So the North Korean troops continued their offense.

American F-80 fighter planes take off from an air base in Japan to aid the ROK and U.S. armies along the Nakdong line. Provided by the U.S. Army

Although we fought each other, turn back the hands of time and Kim Il Sung and I crossed paths on several occasions. My birthplace, Gangseo, South Pyongan Province, is next to Daedong, Kim’s birthplace. During my younger years, I actually came in contact with him a few times. I attended a rally to commemorate the liberation from Japan in Pyongyang at which he gave a speech. I also saw Kim on several occasions visit the office of Cho Man-sik, a nationalist leader in the Korean independence movement, during my tenure as one of Cho’s assistants.

Kim was generally well-liked because he was extroverted and a solid orator.

During his stay in Seoul, Kim and his men did not inflict any damage on the presidential residence the Blue House, then called Gyeongmudae. The structures and everything in them were left intact. It’s a striking contrast to the behavior of the Chinese Army, which caused significant damage to the building.

Why did he have his men preserve the Blue House? I heard the North Koreans were conscientious about preserving the past and keen on protecting the ancient cultural treasures and relics in their possession. Even when they were pushed out of Pyongyang by advancing ROK and American troops, they transported ancient texts, celadon, Buddhist artwork and other ancient artifacts during their retreat to Kanggye, Chagang Province in North Korea.

No one can know for certain if Kim really did have a place in his heart for preserving and protecting ancient relics and that’s why he left the Blue House intact. Even if that is the case, he is a criminal who, by invading the South, caused irreparable damage and everlasting scars for the people of the two Koreas. Countless ancient relics were also lost or destroyed during the war. 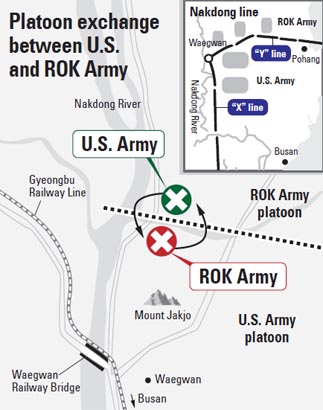 In early August, we organized our troops for battle and started our defense at Dabudong. Kim’s anxiety was reaching a peak.

“The plan to seize Busan by Aug. 15 fell though. The plan was to at least seize Daegu by the same date,” revealed a North Korean prisoner of war.

The North Korean infantry, powered by the volunteer troops, consisting of captured civilians from the South and those forced to fight on the front lines by the guards, was on the offensive.

It was Aug. 12, 1950, and the enemy troops continued their strong offensive attack while the ROK 1st Division tried to come up with new ways to defend the Nakdong line. It was at this time that we received a call from the U.S. 8th Army based in Daegu. We were asked to come out to Hill 303 west of our divisional headquarters. The area was under the supervision of our 15th Regiment. The U.S. 8th Army also asked that the division commander make the trip. Waiting for us at Hill 303 was Harold Keith Johnson, the battalion commander of the U.S. 8th Calvary.

Johnson explained over a C-ration lunch that since the ROK 1st Division and his U.S. 8th Cavalry were in close proximity, it was necessary to dispatch a platoon each to the other. He also stated it was important for the two sides to set up a telephone line.

According to Johnson, the area was very important in the overall scheme of things, considering it was the meeting point of the “X” line under U.S. Army control from Waegwan to Haman County and the “Y” line extending east from Waegwan to Pohang under the ROK Army’s control.

There weren’t any communication problems within the U.S. Army or the ROK Army, but there was a possibility of a mix-up at the axial area, where the Americans and Koreans maintained a joint defense line. That was precisely the reason the North Koreans saw Hill 333 in Waegwan as a weak link. If done properly, the defense line stretching 180 kilometers (112 miles) in total could be properly defended.

Although there were several U.S.-ROK joint operations during the retreat from the Han River, they were sporadic and spontaneous. The exchange of platoons ahead of the Battle of Dabudong was crucial. It was the first time a proper joint operation had been planned and carried out between the ROK and the U.S. Army.

During the lunch meeting, Johnson came across as a very friendly person. Once he was finished with the discussion, he said he had something to say. After stalling for a brief moment, Johnson said, “To be honest, I spent three years in Incheon.”

Johnson went on to to explain that he had been captured by the Japanese during the Battle of Bataan in World War II while serving as an officer in the Philippine Scouts’ 57th Infantry Regiment. He was transferred to a prison in Incheon and held captive for three years.

He explained there was one Japanese prison guard who was especially nice to him, and would sneak blankets and extra food in for him.

“Can you help me locate that Japanese prison guard?” asked Johnson.

“I want to help you, but the Japanese left Korea after losing the war,” I replied.

Johnson understood I could not do much more to help him but looked disappointed nonetheless.

That was what was funny about the war. While opposing sides fight each other with the intent to kill, there are unusual circumstances that lead people to share special bonding experiences - though they must later part ways with a sense of frustration.

Johnson and I ended up becoming good acquaintances. He would go on to become the chief of staff of the U.S. Army from 1964 to 1968.

Although the joint operation consisted of the exchange of two small platoons, I gained confidence from knowing that a huge ally like the Americans would man the line shoulder to shoulder with Korea in an attempt to defend it. I developed a resolve to defend the Nakdong line and to fight back. My thoughts had already carried me past Seoul to Pyongyang.