Veteran Kim has a role as the heart of the team

Veteran Kim has a role as the heart of the team 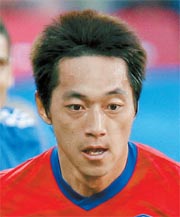 Everyone on a team has a role to play, and midfielder Kim Nam-il has embraced his part as the national football team’s veteran leader.

Football experts often say a team needs a strong bench to be ranked among the best. It is important for a team to have strong starting members, but solid reserve players on the bench matter just as much for team solidarity.

The 2002 Korea-Japan World Cup squad led by Guus Hiddink boasted players such as Kim Byung-ji, Choi Eun-sung, Hyun Young-min and Yoon Jung-hwan, among others, who supported their teammates from the bench.

The 2010 squad is similar to previous national teams in that respect. Regardless of their role or playing time, the players are positive and know how to enjoy competition.

At the center of the strong team morale is Kim. Now playing for Russian club Tom Tomsk, he was once a key player on the national team. Kim made a name for himself with tough tackling and defensive play during the 2002 World Cup, and went on to captain the team after the 2006 Cup.

Although Kim was substituted for Ki Sung-yueng in the 74th minute of Korea’s opening match against Greece on Saturday, his role on this year’s team is smaller. The 33-year-old is now keen on helping the younger and less experienced players.

“I have already played in two World Cups. It’s time for our younger players to step up,” Kim said in an interview after the Greece match. “I am content with filling any shortcomings.”

“Kim Nam-il has changed a lot. He’s not fixated on his playing time but is willing to take on the role that is required of him,” said one Korea Football Association official.

Prior to the start of the match against Greece, Kim went around the locker room hugging the younger players and offering advice.

“It’s your turn to shine. Work hard and leave it all out on the field,” he told them.

“I got a sense that we would pull off a win at that point,” said one national team coach. “The camaraderie and teamwork reminded me of 2002.”