Baduk champ getting married to the perfect mate

Baduk champ getting married to the perfect mate 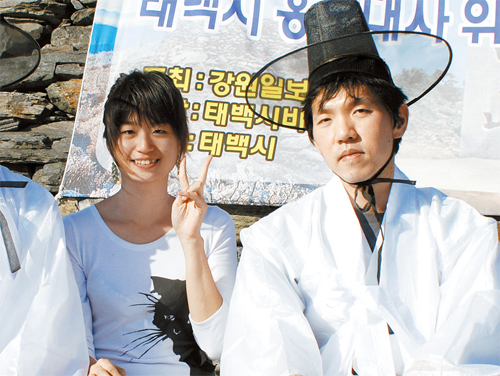 Lee Chang-ho and his fiancee, Lee Do-yun, at a ritual to worship the gods at Mount Taebaek. [JoongAng Ilbo]

Lee Chang-ho, 35, whose status in the game of baduk, or go in English, is on par with a national treasure, is getting married on Oct. 28.

He held a press conference on Tuesday to officially announce the good news.

Lee became the national baduk champion when he was just 14. Since then, he has won a total of 20 international baduk titles, setting a world record.

His nickname in the baduk arena is “Stone Buddha” because his expression never changes during a match and because his ability to read the flow of the game is one of the very best in the world.

Lee’s fiancee, Lee Do-yun, who is 11 years his junior, also has a profound knowledge of baduk. She first learned the game from her father, who played for the Hankuk University of Foreign Studies team. She later completed a program in baduk studies at Myongji University and is now a reporter at CyberOro, a popular baduk Web site.

“My dad would have been very happy if he knew I was getting married to Guksu Lee,” she said, using the nickname given to the best baduk player in the nation.

Her father passed away in a car accident when she was in 12th grade.

She added that she had wanted to become a professional baduk player when she was a child, and that her fiance had always been her role model. For this reason, she still calls him “Guksu.”

The two Lees first met during an interview in May 2008. About four months later, they were seen having dinner together at a restaurant near Express Bus Terminal.

At the time, Chang-ho was said to have told the people close to him that he had fallen in love with Do-yun’s bright smile.

In November last year, he told the press that he was thinking of getting married the following year, even though they hadn’t yet asked him about his budding romance.

The baduk champion is known to be very quiet most of the time, but he is said to talk a lot more when he is with Do-yun.

She says that although they cannot spend much time together since he is so busy, they just meet up for meals and occasionally go to see plays. She says that they also frequently climb Mount Daemo together, which is located near her house.

“Guksu Lee likes climbing mountains. He is constantly tired because of the big matches that come one after another,” she said. “But mountain climbing is good for both the mind and body, so we try to go to Mount Daemo often.”

As for after marriage, she said she thinks the most important thing will be to make her new husband feel comfortable, both physically and mentally. “Guksu Lee is the person I respect the most,” she said.

“I want to be by his side and help him maintain his health and further his career.”