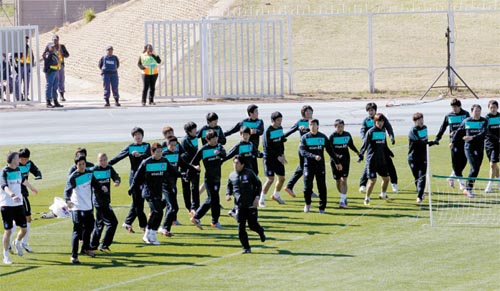 The Korean national football team warms up during practice at Olympia Park Stadium in Rustenburg, South Africa on June 19. [AP/YONHAP]

The Korean national team controls its own destiny in the World Cup as it prepares for the final Group B match against Nigeria early Wednesday in Durban, South Africa.

Manager Huh Jung-moo and his men are expecting nothing less than a win.

“We will not play to tie on Wednesday. When you do, it can turn into a difficult match,” Huh said before a team training session last Friday. “Our players are upbeat. We think of the match against Nigeria as our final shot. Nigeria will not be an easy opponent, but we never thought that our goal of reaching the knockout rounds would be an easy one.”

A victory over Nigeria at Moses Mabhida Stadium (3:30 a.m. kickoff, Korea time) would put the team in a solid position to advance to the knockout rounds of the tourney. 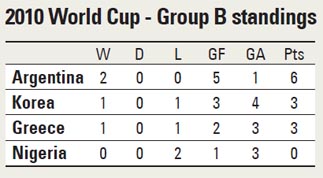 The team, however, could still have a shot at advancing out of the group stage with a draw if Greece also ties Argentina in its final group match. In that scenario, Korea or Greece would advance based on goal differential, followed by the most number of goals scored in all group matches and then the number scored in group matches between the two teams.

Having arrived in Durban yesterday, players will practice and train today and tomorrow. Huh is considering several roster changes as he prepares his team for an African opponent that is ranked 21st in the world. The coach stated during a recent interview with the press that he is looking into two to three shifts in his starting lineup.

If Huh decides to go with two forwards, Lee Dong-gook is expected to get the nod over left-footed Yeom Ki-hun. “I’ve been preparing myself so that I can produce for the team when the opportunity arises,” Lee said. “My biggest goal is to help Korea reach the knockout rounds and I want to score the winning goal.”

After lauding Huh on the heels of Korea’s win over Greece, some fans turned on the coach when the team suffered a deflating 4-1 loss to Argentina last week. One of the criticisms revolved around his decision to bench Cha Du-ri in favor of Oh Beom-seok at right fullback. Cha is expected to get the nod over Oh against Nigeria.

“The team atmosphere has changed somewhat since the Argentina match,” Cha said. “However, it’s time for the fans to be supportive of the team. There will be plenty of time to judge the team when the tournament is over.”

One other possibility is that veteran goalkeeper Lee Woon-jae will get the start over Jung Sung-ryong. Jung got off to a solid start in his World Cup debut against Greece by not allowing a single goal, but he looked less impressive against the potent Argentine offense. Although Korea’s defense did not do much to help Jung’s cause, the 25-year-old goalkeeper failed to clear the ball properly and looked to be out of position on the third and fourth goals of the game. Participating in his fourth World Cup - and having played in his share of pressure-packed big games in the past - Huh hinted at going with the experienced hand at net.

“I’ve been a reserve player the past two games, but I think I have a role to play on this squad,” Lee Woon-jae said on Friday.

Korea has traditionally matched up well against African nations. Since its first match against Nigeria in 1983 to the friendly game against Ivory Coast in March of this year, Korea has played a total of 23 games against countries in Africa and holds a record of 12 wins, six draws and five losses. Korea has won two games and tied another against Nigeria.

The Super Eagles will be without midfielder Sani Kaita, who was ejected in the 33rd minute of Nigeria’s match against Greece for kicking Vasileios Torosidis after the ball went out of bounds. Replacing Kaita in the lineup will be Uzbekistan-born Nigerian-Russian Peter Odemwingie. Left fullback Taye Taiwo will also miss the match due to an injury.