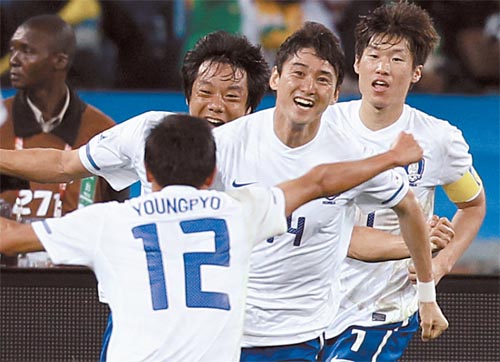 Lee Jung-soo, center, celebrates with teammates after scoring the equalizer against Nigeria in the Group B match on June 23. [YONHAP]

DURBAN, South Africa - Change is good; or at least it’s worked out for the best for the national football team’s Lee Jung-soo.

Known as a defender with a scoring touch, Lee kick-started Korea’s drive toward the Round of 16 by scoring the opening goal against Greece on June 12.

Perhaps it was only fitting that he also scored the equalizer in the 38th minute to pull Korea even with Nigeria in their final Group B match on Wednesday morning.

Both goals were well-executed set-piece plays in which Lee found an opening on the far end and calmly tapped in the ball.

The goals were only possible because Lee had played his entire amateur career as a forward before switching to defense in the pros.

With two years on the national team under his belt at 30, Lee is at the peak of his football career.

Lee took up football in the third grade, and was the starting forward on all the teams he played on through his collegiate career.

He broke into the K-League with the Anyang Cheetahs (now FC Seoul), as a forward in 2002. At 185 centimeters (6 feet 1 inch), Lee had the size but lacked the speed to become a successful forward. He couldn’t compete with the overseas players who fill many of the starting forward positions around the league.

But Anyang manager Cho Gwang-rae noticed that Lee played an adept physical game and suggested he make the switch to defense.

It’s never easy for a football player to change positions, and the fluency with which they do can make or break a career. Many players react with anger when someone suggests they make the switch to the inglorious task of shadowing the opposing team’s attackers.

Lee was reluctant to give up the position he’d always played, but he took up Cho’s offer.

“If I had insisted on playing forward back then, I might not have made it on the national football team,” said Lee.

“I’m forever indebted to Cho for opening the doors to a career as a defender.”

Lee began to show his abilities in that position in the K-League when he transferred to Incheon United in 2004. He contributed to the team’s runner-up finish in 2005.

Jang Wae-ryong, Incheon’s manager at the time, is the man responsible for taking Lee - who had the speed, toughness, passing skills and goal-scoring abilities in set-piece plays - and turning him into a star.

“I don’t know what the national football team coaching staff is up to but if I were them, I would take Lee in a heartbeat,” Jang said about his defender back in 2005.

Lee still counts Cho and Jang as the two managers he respects most. He’d move on to the Samsung Bluewings and help them to a league title in 2008 before moving onto the J-League.

“I get a strong urge to produce in set-piece situations. It’s because I want to contribute to the offense and score goals,” said Lee.

“I’d be lying if I said I didn’t have a strong desire to score.”