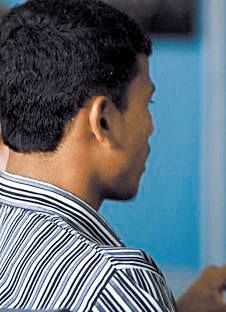 Former Maoist People’s Liberation soldier, who declined to be named, gives an interview to AFP in Kathmandu. [AFP]

Gopal was just 14 when soldiers from the Maoist People’s Liberation Army came to his village in eastern Nepal looking for new recruits. Won over by their promise to bring equality to the impoverished, deeply feudal country, he left with them, telling his brother he would only be gone a few days.

But he never returned, spending the next two years in jungle hide-outs and fighting alongside the Maoists in their bloody insurgency against the country’s 240-year-old Hindu monarchy.

Now Gopal, whose name AFP has changed at his request, is trying to rebuild his life after being formally discharged from the Maoist army cantonment where he lived for more than three years after the war ended.

Like many of the thousands of former child soldiers who fought with the Maoists, he feels let down by the former rebels, and now faces an uncertain future in a country where job opportunities are scarce.

“I joined because the Maoists said they wanted to get rid of feudalism,” Gopal told AFP in an interview. “They came to my village and beat up the landowners, which my grandfather said was a good thing, because the landowners had exploited people for so long and there was a lot of injustice.

“I was very unhappy when the war ended. A peace agreement should have brought happiness, but we felt we had achieved nothing.”

More than 23,000 former Maoist fighters were confined to UN-supervised camps after the decade-long civil war between the guerrillas and the state ended in 2006, awaiting agreement on how to integrate them into the national army. Subsequent UN checks found that 4,008 were not genuine combatants, in most cases because they were under 18 - a violation of international law - and they were finally discharged this year.

The discharged were not the only child soldiers who fought alongside the Maoists - thousands more youngsters fled the Maoist ranks during the course of the war and most of those have since returned home.

But many of those who joined willingly and stayed until the end of the war came to see their comrades as their family, and are unwilling to return home now that they have been discharged. Some fear being ostracized by their communities for joining the Maoists, while others see better job prospects in bigger cities than in the rural areas they came from. Some have gone to work for the Maoists, now Nepal’s main opposition party. Counselors are on hand to deal with the myriad problems they face - from trauma related to involvement in combat to the separation of couples who married and had children in the camps. The United Nations is funding a rehabilitation program for the former combatants amid fears they could be vulnerable to Nepal’s numerous criminal gangs, many of which have political ties. AFP