Memoir tells of 46 years as a POW in the North

Memoir tells of 46 years as a POW in the North 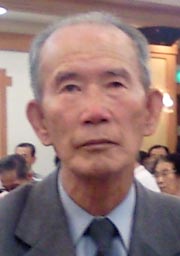 A man who spent 46 years as a North Korean prisoner of war is sharing his painful experiences in a new book, “Under Starry Nights in Hell.”

“It’s been 10 years since I came to the South, but I still clearly remember the 60 POWs I went through the tough times with,” Yoo Young-chul said at a celebration yesterday at the National Defense Center in Yongsan, Seoul, to mark the memoir’s publication.

“The [South Korean] government gives POWs the status of a soldier killed in battle, so no one, neither South nor North, remembers the POWs.”

Yoo, 79, escaped from North Korea in 2000. He called for South Korea to do all it can to bring home the POWs remaining in North Korean hands.

So far, 79 POWs have returned to the South. The government estimates that another 500 remain in the North.

Yoo joined the Army at the height of the Korean War in 1952. In June 1953, while the war was nearing an end, his division engaged in a fierce battle against the Chinese army. A cannonball dropped on Yoo’s division, almost burying him in the ground. Yoo was discovered and captured by the Chinese, who handed him over to the North Korean People’s Army.

Yoo was indoctrinated with communist ideas for two months, and had to polish portraits of Kim Il Sung and Kim Jong-il every morning. After the brainwashing was over, Yoo worked with other POWs at a mine in Cholsan, North Pyongyang, for 46 years until his escape.

Yoo crossed the Tumen River into China with his daughter in July 2000 and arrived at Incheon on Aug. 30 that year. His North Korean wife died before they made their escape.

“I got married and had kids in North Korea, but I couldn’t stop thinking about going back home,” said Yoo. “The thought of returning to South Korea was what kept me going.”