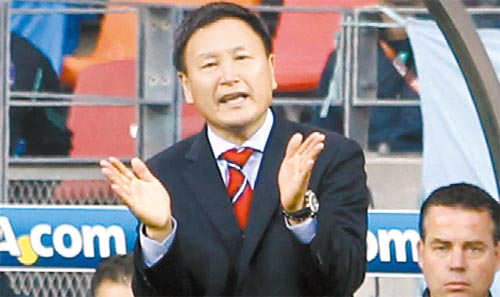 National football team manager Huh Jung-moo encourages his players from the bench during the Round of 16 match against Uruguay. [YONHAP]

PORT ELIZABETH, South Africa - The Korea Football Association (KFA) said Sunday that it will officially appoint the national team coach early next month, a move that suggests it could stick with Huh Jung-moo, who steered the country to the second round of the South African World Cup.

The KFA has no time to waste in appointing a football chief, as the team must start preparing for the qualifiers for the 2011 Asian Cup in August, he added.

Cho hinted that Huh might remain in the position, conveying his view that “an experienced South Korean coach should be placed at the helm for a long time.”

In the first World Cup held on the African continent, Huh’s squad reached the Round of 16 but was eliminated Saturday by Uruguay in the first knockout stage match in Port Elizabeth.

“We must soon prepare for the Asian Cup,” Cho said. “Therefore, I will discuss appointing the head of the national team soon after I return home.”

Lee Hoi-taek, chairman of the KFA’s technical committee, said, “Nothing has been decided regarding the appointment of the national team coach.”

He added that the organization “will carefully decide after holding a number of meetings of the technical committee.”

If Huh is reappointed as manager of the national team, it would mark the first time that a Korean manager retains his managerial position after the World Cup.

At a post-match press conference Saturday, Huh said that he hasn’t thought about his future during preparations for the World Cup but that he wishes to continue helping his country.

Having taken over the squad in December of 2007, Huh was successful in building a team consisting of both young players and seasoned veterans.