No fairy-tale ending for pitcher Yang and ill fan

No fairy-tale ending for pitcher Yang and ill fan 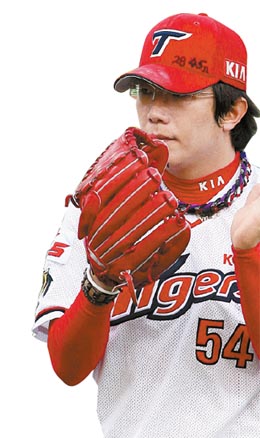 The Kia Tigers’ Yang Hyun-jong took to the mound against the SK Wyverns yesterday with a lot on his mind.

For one, the Tigers were struggling through a nine-game losing skid and in danger of slipping out of the playoff race, even though on a personal level, Yang has posted 10 wins so far this season and is in contention with SK’s Kim Kwang-hyun as the top pitcher in the league.

But Yang had something else eating away at him last night. A month earlier, the Tigers’ public relations team had notified him that an avid female fan of his was suffering from leukemia. Yang was scheduled to go meet the fan on June 5, but due to a sudden deterioration in her condition, he was not able to make the visit.

Two weeks later, Yang finally made it to her hospital in Ilsan, Gyeonggi. He took with him a ball and a sheet of paper signed by his teammates. He told the fan to get well soon because, he said, “I will invite you to the VIP section when I’m vying for my 20th win this season. I hope to see you there.”

Yang knew it would not be an easy feat, even with half the season yet to come. The pitcher later said he made the pledge because he simply wanted to give the struggling fan some hope.

Yang posted a message about the encounter on his personal Web site.

“In movies, you often see people suffering from illnesses recover in a miraculous manner when they finally meet someone they had been longing to see for a long time,” Yang wrote. “Maybe it’s something that only happens in movies, but I’d like to believe that it can happen in real life.”

Tigers fans who read about the woman online and in the media expressed their good wishes as well.

But there was no happy ending for Yang and his fan. Ten days after Yang’s visit to the hospital, he received news that the fan had passed away.

Yang posted again on his site on June 28.

“I apologize. I guess I did not pray enough,” he wrote. “I wanted to invite her to the best seat in the house and put on a performance for her.”

Although Yang could not keep his promise with the female fan, he will continue to pitch this season with the thought that a certain fan will be rooting for him from above.