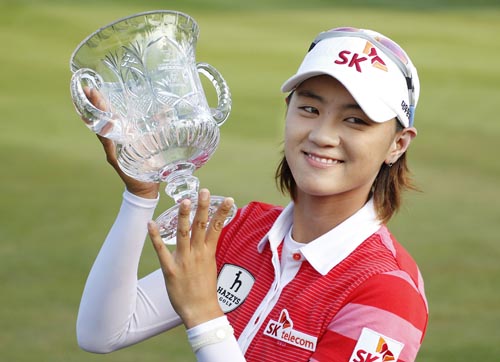 “As I was walking toward the green today, I was thinking about how I had won the last two tournaments and I said to myself, ‘Maybe I can do it again,’” said Choi, who birdied her final hole to claim both of her prior two LPGA Tour titles.

Choi carded a final-round 71, and it took a 15-foot birdie putt on the 72nd hole to continue her day after she had squandered what had been a lead of as many as five strokes.

“It was tough out there. I was nervous at times,” Choi said. “But I tried to focus on my game. Now I’m really happy, and proud that I controlled my emotions today.”

Choi had led after each of the first three rounds. She was up by two through nine holes on Sunday, but gave up that lead with back-to-back bogeys at 14 and 15. Kim In-kyung, who shot a 64, had four birdies in the last seven holes as she posted a 14-under total of 270 that saw her slip past Choi.

Kim Song-hee, who had a final-round 66, birdied the 17th to join Kim In-kyung on 270, while Christina Kim, who was five back of Choi after a double bogey at 10, birdied the next three holes and added another one at 17 to join the growing group at 14-under.

Playing in the same pairing with Choi, Christina Kim watched Choi nail her long birdie putt at the 72nd to get to 270 and then had a 12-footer for the win.

It missed right, and the four players headed to a playoff, in which the par-5 18th and par-5 17th were the designated playoff holes.

“We were playing two par 5s, which you can make birdie on,” Kim In-Kyung said. “I had my chance, and everyone had their own chance.”

All reached the green of the first playoff hole in regulation, but all four missed birdie putts of 10-18 feet. After the other three missed their birdie attempts, Kim Song-hee failed to make a 10-footer.

“The thing is, you have to expect everybody to make their putt,” Christina Kim said. “Once you get into match play format, you have to think that someone’s going to make it. I was surprised when none of the putts went in. It was a very difficult hole location. But, still, I thought someone was going to make it.”

The quartet went back to 17. Kim Song-hee flew her third shot over the green and into a bad lie in the back bunker. She barely got her fourth shot out, ending her chances.

Christina Kim had a 20-footer for birdie, Kim In-Kyung a 12-footer and Choi’s wedge nestled close.

After the first two missed their birdie attempts, Choi, who had previously won the Samsung World and Kolon-Hana Bank Championships, sank hers. Choi credited caddie Paul Fusco with helping her control her emotions throughout the day.

“He told me to calm down. I was nervous after those two bogeys and he said to just calm down,” Choi said. “I tried to think positive. On the last (72nd) hole, I knew I had to make that putt. I tried to putt it with great passion.”