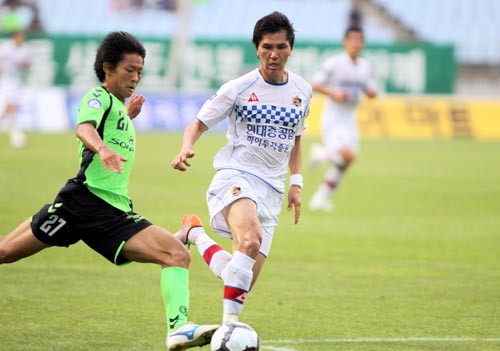 Jeonbuk Motors received a big boost from an unlikely source on Wednesday night to advance to the semifinals of the Posco Cup.

Kim Ji-woong, a 22-year-old rookie midfielder who has been playing with Jeonbuk’s farm club, got a rare start with the pro team in the Posco Cup quarterfinals against Ulsan Hyundai. He made the most of the opportunity, delivering a goal and an assist to help the squad to a 2-0 win.

Kim has yet to earn a regular spot on the team and has been playing on its farm club for an annual salary of 12 million won ($9,984). With K-League matches, AFC Champions League tournament games, the FA Cup and a host of other tourneys on the agenda this year, Jeonbuk manager Choi Kang-hee decided to start several reserve and farm team players in Wednesday’s game.

It’s not easy for players like Kim to crack the squad’s starting lineup, as it features quality midfielders and wingers like Kim Hyeung-bum, Choi Tae-uk and Eninho.

In the eighth minute of the match, Kim received a pass from Lee Gwang-jae and calmly scored the opening goal. Then, in the 34th minute, he assisted on Kim Seung-yong’s goal.

His offensive performance came against an Ulsan Hyundai defense that features notable players like Kim Dong-jin and Kim Chi-gon.

“Kim Ji-woong was the most valuable player of the game,” Jeonbuk Motors manager Choi Kang-hee said. “He possesses a good set of skills and speed and responds well in the heat of competition. I look forward to seeing more performances from Kim in the future.”

Having enrolled at Kyung Hee University in 2008, Kim entered the 2010 K-League Rookie Draft after his sophomore season.

“I wanted to make the jump to the pros quickly and play with some of the best players in the country,” Kim said.

Although boosting his own game was a prime motivation behind the move, the financial side of the equation also came into play. His family’s primary source of income is a small clothing shop operated by his mother. Kim’s parents struggled financially over the years, and Kim wants to help his mother’s business and contribute to the family’s finances.

Although Kim is making a relatively meager salary this season, he dreams of providing luxurious cars and a big house for his parents in the future.

As an unproven rookie, Kim has a long way to go. But instead of making lofty statements about his skills, he has a simple goal: “to become a steady player for many years.”