A brotherly battle at the plate

A brotherly battle at the plate 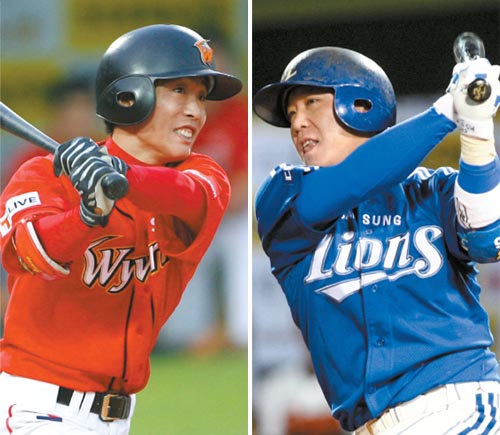 In the world of baseball, there’s no such thing as brotherly love - at least when it comes to postseason play.

Brothers Cho Dong-hwa, 29, of the SK Wyverns and Cho Dong-chan, 27, of the Samsung Lions are gearing up for the likelihood that they will face each other in the Korean Series, presenting baseball fans with what is sure to be a memorable postseason this autumn.

The Wyverns currently hold the top spot in the standings with 58 wins and 26 losses as of July 17. The Samsung Lions are in hot pursuit, ranking second with 52 wins and 36 losses.

The two brothers spend a lot of time speaking on the phone these days, arguing about who will win the Korea Baseball Organization title this year and talking a little smack.

They have yet to face each other in the postseason in their professional careers.

“You better get ready,” the younger Cho said recently to his brother. “Our team got stronger.”

Cho Dong-hwa shot back: “Bring your ‘A’ game. SK is going to win it this year.”

While the possibility of facing each other in the postseason has the two brothers excited, they’re also giddy over the opportunity to provide their parents with something special.

“I think our parents will be able to truly enjoy the postseason this autumn,” Dong-hwa said.

The brothers are known to be extremely close, which stems from their upbringing. Dong-hwa and Dong-chan did not grow up under the best of circumstances from a financial perspective.

Their parents ran a wholesale egg business, and it was often difficult for the father and mother to support the baseball dreams of their two children.

When Dong-hwa was in sixth grade, his parents discussed whether to ask one of the two to give up baseball. Dong-hwa immediately said he would quit so that his younger brother could continue with the sport. According to Dong-hwa, his parents eventually relented and decided to support both brothers.

From a physical perspective, there are some distinct differences between the brothers.

Dong-hwa is 175 centimeters (5 feet 7 inches) tall and weighs 70 kilograms (154 pounds), while Dong-chan has a better baseball build at 180 centimeters and 80 kilograms.

Dong-chan was tabbed as a hot prospect from an early age, but Dong-hwa didn’t generate nearly as much buzz and entered the pros the hard way.

After graduating from Gongju High School in Gongju, South Chungcheong in 2000 and having failed to attract much attention, Dong-hwa went undrafted and signed on with the SK Wyverns as a free agent. As is often the case with players who are not drafted high in the annual rookie draft, life as a young professional in the KBO on meager pay was not easy for Dong-hwa. But he still sent baseball equipment to his younger brother - who was playing for Gongju High School - whenever he could.

Dong-chan, on the other hand, was drafted first overall in the second round of the 2002 Rookie Draft by the Samsung Lions. He earned a starting spot with the club in 2004 and went on to win back-to-back Korean Series titles in the 2005 and 2006 seasons. He gave the championship rings to his parents as a gift and gave a portion of his bonus to his older brother.

“I was able to develop into the player I am today because of my brother’s support during my high school days,” Dong-chan was quoted as saying after winning his first Korean Series title.

Dong-hwa got his major shot in 2007, when was named as a starting outfielder with the Wyverns. The team went on to win back-to-back Korean Series titles in the 2007 and 2008. Dong-hwa gave a portion of his championship bonus to his younger brother.