From Ulleung with a skip and a prayer

From Ulleung with a skip and a prayer 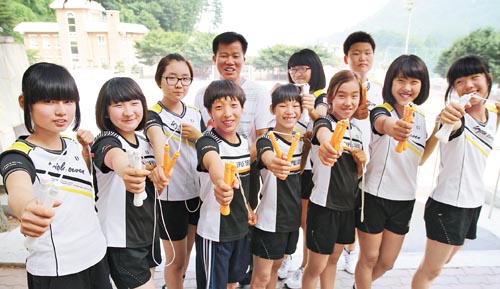 Ten students from Jeodong Elementary School and Woosan Middle School and their coach Kim Dong-seop pose for a picture before they embark for Loughborough, U.K., for the 2010 Rope Skipping World Championships. By Kim Hyeong-gu


A group of 10 elementary and middle school students from Ulleung Island in the East Sea will compete in an international jump rope competition in the U.K.

The students from Woosan Middle School and Jeodong Elementary School left Tuesday with their coach Kim Dong-seop for the FISAC-IRSF 2010 Rope Skipping World Championships and World Youth Tournament, which will be held from July 27 to Aug. 4 in Loughborough, United Kingdom. Jump rope talents from over 40 countries will compete.

Although Kim established the team only three years ago, it amazed the whole Ulleung community when it won a contest organized by the Korea Jump Rope Association and was the semifinal winner of the Asian Rope Skipping Championship in Hong Kong last year.

Parents on the island asked Kim to form a team after they heard of his expertise in the sport.

“Many parents said they are deeply worried about their obese children,” Kim said. “Kids eat too much fast food and prefer playing computer games to taking a walk. I accepted their offer.”

Kim’s passion for jump rope dates back to 1995 when he taught at a school in a village in North Gyeongsang. He was surprised that 20 out of 35 fifth and sixth graders were being raised by a single parent or grandparents, and he was looking for some activity that could motivate downhearted students.

He saw a newspaper advertisement about a jump rope festival and went straight to the Seoul Olympic Stadium to see if it offered any inspiration. It did: Kim was mesmerized by then-77-year-old jump rope expert Lee Wal-gyu who skillfully jumped rope to the rhythm of music.

When he enrolled the Ulleung students in the U.K. competition, the students found that they couldn’t afford the plane tickets. Parents and the North Gyeongsang Provincial Education Office sprang into action, and they chipped in money, raising enough to send the 11-person team.

The team’s specialty is Double Dutch, in which two long ropes spun in opposite directions are jumped through by one or more individuals.

Kim said his students have been changed by the sport. They’ve learned concentration, teamwork and harmony. And competitiveness, too.

“I will show them how shrewd we country fellows are,” said team member Gil-un, 12.