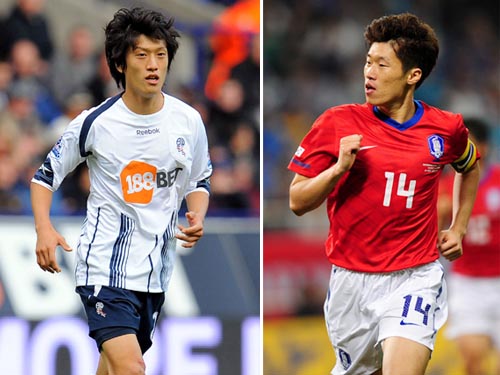 LONDON - Korean stars Park Ji-sung and Lee Chung-yong are preparing for key roles at opposite ends of the Premier League when the new season gets underway on Saturday.

Both Manchester United winger Park and Bolton midfielder Lee should feature prominently as their teams go in search of contrasting goals over the next nine months.

For Park, the season will be a disappointment if United fails to regain the Premier League title they surrendered to Chelsea in May, while a long run in the Champions League is also expected every year from Sir Alex Ferguson’s side.

Park returns to United after becoming the first Asian to score in three consecutive World Cups following his goal against Greece in South Africa.

The Korean national team’s captain was one of his country’s best players in this year’s World Cup, which saw Korea reach the second round before losing to eventual semifinalists Uruguay.

He won’t have time to dwell on that disappointment for long once he is back in the thick of the action for United.

Ferguson’s team ended last season on a low note as they missed out on a record 19th English league title and bowed out of the Champions League in the quarterfinals.

That kind of underachievement won’t be tolerated for long by Ferguson, who has come to rely on Park’s boundless energy and whole-hearted commitment more and more during the Korean’s five years with United.

Expectations at Bolton are significantly lower than at Old Trafford, and a season of mediocrity - an unthinkable prospect for United - would be regarded as a major achievement for boss Owen Coyle and his players.

If Bolton are to avoid a repeat of last season’s relegation battle they will need another fine season from Lee, who won the club’s Player of the Year award in his first campaign after arriving from FC Seoul in August 2009.

Despite his diminutive stature, Lee proved more than capable of adjusting to the physical challenges of the Premier League, and the 22-year-old quickly left his own mark on the league with some impressive skills.

His eye for a defense-splitting pass and clever use of the ball in possession allowed Bolton to play the kind of entertaining football that Coyle demands.

Lee also showed a valuable eye for the goal as he hit winners against Birmingham and Burnley and also netted against West Ham and Lincoln.

Despite the draining experience of playing in the World Cup during the offseason, Lee is sure he has the stamina to keep going and he is determined to build on the momentum he established last season.

Lee admits he was delighted with the way he found his feet in England so quickly and he attributes his success partly to the lack of pressure he feels at Bolton.

“At first I was worried because it was my first time playing in a European league. But I was so surprised that everyone was welcoming, my teammates and the fans,” he said. “My ambition was to play as many games as I could. Now that I have done that, I am proud of what I have achieved.

“The pressure was not on me as there was no expectation as I was unknown here. I like a quiet life, so living in England suits me as player.”

Asia’s only other representative in the Premier League this season is likely to play a more reduced role than Park and Lee.

Korea defender Cho Won-Hee has made just five appearances for Wigan since moving to the DW Stadium in March 2009.

The 27-year-old returned to his former club, Suwon Bluewings, on a year’s loan in January, so he won’t be in action for Roberto Martinez’s team for at least half of the campaign.