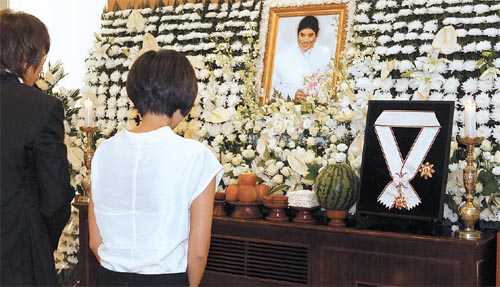 Mourners offer their condolences to Andre Kim at the mourning altar set up at Seoul National University Hospital in central Seoul yesterday. At the right side of the altar is the Geum-Gwan Culture Merit Medal, the top government award for cultural and artistic figures, that was conferred by President Lee Myung-bak in recognition of Kim’s contribution to nation’s culture and art. [YONHAP]


An endless flow of cultural figures and celebrities flocked to the mourning altar for Andre Kim, Korea’s most admired fashion designer, at Seoul National University Hospital in central Seoul, where he died on Thursday.

The 74-year-old design guru, best known for splendid puffy multi-layer dresses adorned with laces and applique, died from pneumonia due to complications from colon cancer from which he had been suffering for the past five years. He had been staying in the intensive care unit for the past month.

His death caught the public by surprise since he had kept his illness hidden until only the last few weeks, according to his aides. He is survived by Jung-do, whom he adopted as his son in 1982.

Former Culture Minister Yu In-chon, the soprano Sumi Cho and many entertainers offered their condolences to the designer who was known for his interest in cultural events and devoting himself to promoting Korea abroad.

Kim is scheduled to be buried at the Cheonan Memorial Park in South Chungcheong tomorrow.

“[Andre Kim] was a true patriot. He always volunteered to promote the country and publicize Korea to foreign ambassadors. He had a flamboyant style, but was frugal in his personal habits,” Choi Bool-am, an actor of more than four decades, told the press.

Sumi Cho was seen shedding tears when she visited Kim’s mourning altar. Kim was a long-time patron of the world-class diva, having made more than 200 pieces of stage dresses for her since 1988 when she made her debut. Cho once said that Kim made it a rule to sit in the middle of the first row when he attended her recitals.

Internet message boards and social networking sites such as Twitter and Facebook were flooded with postings wishing Kim a peaceful rest. TV networks have rushed to schedule documentaries and shows about his life.

In thanks for his contributions, President Lee Myung-bak yesterday conferred upon Kim the Geum-Gwan Culture Merit Medal. “Andre Kim publicized the country’s culture to the world through world-class fashion works. He was also loved and respected by the whole nation for continuous donations and service,” Lee was quoted as saying by the Blue House.

Kim said he was inspired to become a fashion designer after seeing the clothes designed by Givenchy in the movie “Funny Face.” After graduating from Kookje Fashion Design Academy in 1961, he opened the Salon de Andre in central Seoul, Korea’s first male fashion designer to do so. Born as Kim Bong-nam, he changed his name to Andre, a nickname given to him by a French diplomat.

Kim became the first Korean designer to hold a fashion show in Paris, and the events he organized served as networking venues for social, political and business figures. His clients included Michael Jackson when he performed in Seoul twice in the 1990s.

“I want my fashion shows to be viewed as cultural events, not simply commercial events featuring the season’s trends,” Kim once said. He earned a number of medals and prizes from around the world in recognition of his cultural and diplomatic contributions.

Kim was also a pop culture icon known for his signature look: an oversize white outfit that resembled a boilersuit, a red checkered muffler and a hairless scalp, with black mascara. The products Kim launched included everything from cosmetics to credit cards and household appliances.

His fashion was matched by his unique way of speaking, pepppered with English words like “fantastic,” “beautiful” and “elegant.”

Even after turning 70, Kim continued holding fashion shows five or six times a year at home and overseas. His last was in Beijing in March. According to his spokeswoman, Kim was planning another fashion show this fall in Gyeongju, North Gyeongsang.