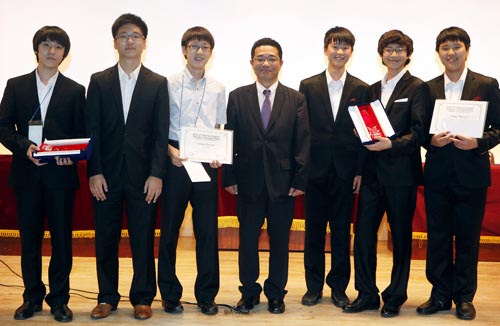 
One team came out on top to defeat 99 other students in the 2010 Second Korea English Debate Championship for middle school students at Kyung Hee University in Seoul.

The team LY Dynasty was selected yesterday as grand champion of the two-day event after debating for roughly an hour on a subject selected only after the final two teams were announced.

One hundred and two middle school students who competed in the debate championship were required to prepare for debates in teams of three, and the final three boys who came out on top from team LY Dynasty were Yang Jae-ho and Yang Joon-ho, who attend Guryong Middle School, and Lee Chang-hun, who attends Aju Middle School. Both schools are in Seoul.

The final debate subject was capital punishment, which spurred a heated argument between the two teams which brought up famous cases of rapists and murderers convicted for their crimes in Korea.

The championship was hosted by JoongAng Daily, a partner of the International Herald Tribune, to “foster young talent to lead a global generation and establish a debating culture,” according to the KEDC’s website, http://kedc.or.kr. Students who wish to participate in upcoming debating competitions can apply on the website. The grand champion team members each received a trophy and a yearlong subscription to the IHT-JoongAng Daily.

Students who participated in the event were judged by 22 adjudicators currently attending universities in Korea and the U.S.