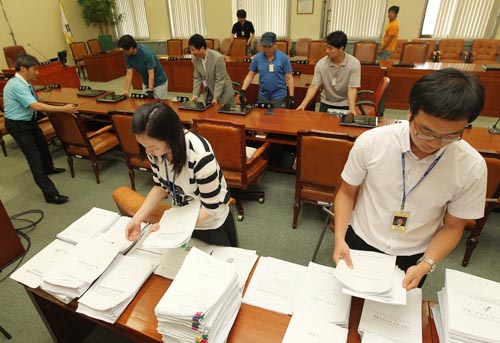 
President Lee Myung-bak’s choices for prime minister, cabinet positions, and police and tax chiefs will face harsh attacks from the opposition parties as the National Assembly prepares to hold confirmation hearings for the nominees to evaluate their qualifications.

Nominees for the Ministry of Knowledge Economy and the Ministry of Labor are the first ones to be grilled today. On Monday, designates for the ministers of education, welfare and agricultural will have confirmation hearings, as well as the nominee for minister without portfolio. The controversial national police chief nominee will also undergo hearings on Monday. A confirmation hearing for the culture minister nominee will take place on Tuesday.

Prime Minister-designate Kim Tae-ho will face two days of grilling on Tuesday and Wednesday. The National Assembly’s approval is required for Kim’s appointment. The ruling Grand National Party enjoys the majority in the 299-member National Assembly with 172 seats.

The confirmation hearing date for the chief tax official nominee is yet to be decided.

Democrats and other liberal opposition politicians have focused on attacking Kim and Cho Hyun-oh, nominated as commissioner of the National Police Agency. A series of new allegations against other nominees for the top posts of the Lee Myung-bak administration have also surfaced.

Liberal opposition politicians have pledged to disqualify at least three nominees, based on a review of their ethics and work capabilities.

The Minister of Culture, Sports and Tourism-nominee Shin Jae-min is grappling with accusations that he evaded capital gains tax and that he forged his residential addresses to send his children to better schools.

Lawmakers believe Lee Jae-hoon, nominated to head the Knowledge Economy Ministry, had been involved in real estate speculation. Lee’s wife was accused of having purchased a house in one of Seoul’s poorest neighborhoods based on insider information about the city’s urban redevelopment plan. The nominee is also accused of having falsely reported his personal wealth.

Labor Minister-designate Bahk Jae-wan was also suspected of violating the address registration law, but the Ministry of Labor said it was an administrative mistake made while Bahk was living overseas.

Opposition legislators claimed Lee Jae-oh, designated as minister without portfolio to handle political affairs, received bribes from a top executive of the Daewoo Shipbuilding and Marine Engineering in return for assisting his bid for a reappointment.

The lawmakers also raised an issue about Education, Science and Technology Minister-designate Lee Ju-ho’s conflicting reports of his assets filed with the National Election Commission and the National Assembly between 2005 and 2007.

Yoo Jeong-bok, also a GNP representative who was nominated to lead the Ministry of Food, Agriculture, Forestry and Fisheries, has been criticized for lacking expertise in the field. Opposition parties have complained that Yoo was given the post because he is a close aide to Park Geun-hye, a former GNP chairwoman and President Lee’s rival, as a part of the Blue House’s political gesture to mend the rupture.

Other suspicions by the Democrats were about Prime Minister-designate Kim’s wealth increases and relationship with certain businesspeople.

The ruling and opposition parties have agreed to allow Park Yeon-cha, the convicted former head of shoemaker Taekwang Industrial, to attend Kim’s confirmation hearing to speak about allegation that he had given bribes to Kim.