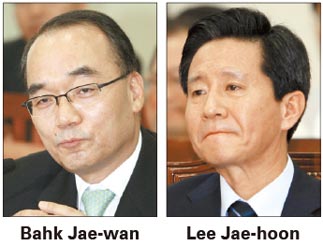 Tough questions were posed, voices were raised and grovelling public apologies by minister-designates were offered yesterday during the beginning of confirmation hearings for President Lee Myung-bak's new ministers and top officials.

Hearings are being held at the National Assembly through Aug. 26 for 10 newly named officials following Lee's cabinet reshuffle Aug. 8.

First up for questioning were Lee Jae-hoon, the new minister of Knowledge Economy, and Bahk Jae-wan, who will take over the Ministry of Labor.

Lawmakers quizzed the two men extensively on health details, fishy financial deals and military service, but the hearings are basically toothless because the National Assembly cannot block the president's appointments.

Lee Jae-hoon had a rougher time because his wife was accused of being a speculator after she purchased property in the underdeveloped area of Changsin in Seoul, one year before the neighborhood was scheduled for re-development in 2007. Property speculators are generally disparaged in Korea, and Lee's wife was accused of having insider information about the redevelopment.

Lee apologized for "causing trouble for the public because of his wife's actions."

When lawmakers demanded an apology, Lee explained that his wife had bought the property to "prepare for life after retirement . . . and although it was my wife who did it, I feel it is the result of my lack of virtue."

Lee was also asked how his personal wealth had increased by 600 million won ($507,485) since the by-elections in April 2009. The former vice minister of the Ministry of Knowledge Economy acknowledged that he had accumulated the wealth during that period and said he would present data later to prove it was legal.

Lawmakers accused Bahk - previously a senior presidential secretary - of switching residences in a short period of time to get his kids into better schools and avoid taxes, which Bahk denied.

He did admit to having violated the resident registration law by registering under a false address, saying it was "due to negligence."

The labor minister nominee was also asked why he didn’t do mandatory military service. Bahk said he was assigned to reserve duty after a military-run hospital determined that he could have difficulty with hard labor because of a blood pressure condition he had when he was young. Lawmakers protested that he didn't have records to prove this.

The hearings will continue Monday for Lee Jae-ho (minister without portfolio), Cho Hyun-oh (commissioner of the National Police Agency), and Lee Ju-ho, Chin Soo-hee, and Yoo Jeong-bok (ministers of education, welfare and agriculture). Shin Jae-min (minister of culture) is up on Tuesday, Kim Tae-ho (prime minister) from Wednesday to Thursday and Lee Hyun-dong (National Tax Service Commissioner) on Friday.