A day in the gloves of a top stomach cancer surgeon

A day in the gloves of a top stomach cancer surgeon 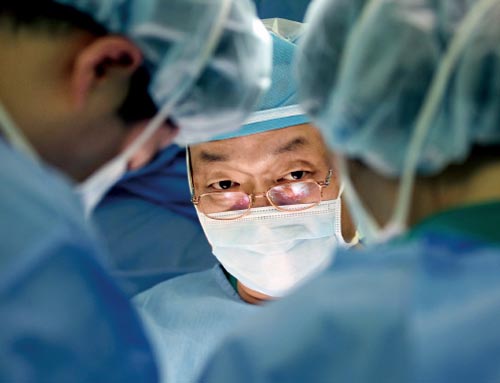 Stomach cancer is the second-deadliest cancer in the world, and the most common type in Korea. That shows just how urgent the work of Professor No Sung-hoon is.

No has performed more surgeries on stomach cancer patients, he says, than any other doctor in the world, treating about 8,000 patients in the 27 years since he became a surgeon. No spoke to the JoongAng Ilbo, the Korean-language affiliate of the JoongAng Daily, on Aug. 17 at his office at Yonsei University and at his operating room at Yonsei Severance Hospital.

Q. You have performed more stomach cancer surgeries than anyone else around the world.

A. I take around 600 people on my operating table each year. I think that’s the most any doctor does. The National Cancer Center in Japan, where the stomach cancer pathogenesis rate is high, about four to five doctors together take 600 patients for a surgery in one year.

How is your record of success?

Those statistics are based on the performance of each hospital, not each doctor. According to various international medical journals, it has been shown that our hospital’s record exceeds that of the National Cancer Center in Japan and the MD Anderson Cancer Center in Texas, the United States. I think this record was possible for us because of our tradition of teamwork among medical experts and our long history of doing surgery after surgery, which helped train our team. Also, the constant effort to reduce the chances patients will develop complications helped us.

What special efforts did you make?

I was always studying ways to reduce operating time and blood loss. Exposing organs that are usually hidden inside the body for a long period is bad. So I adopted electrocautery, which is often used in orthopedics or neurosurgery, to stop bleeding. As a result, I was able to cut operating time from around four hours to two. After presenting this method at international medical conferences in 1995 with a video recording the operation, around 100 doctors from Japan, China and the United States came to learn this method.

What are some important factors in treating stomach cancer?

Along with a full recovery from the disease, I consider the quality of the patients’ life post surgery as extremely important. After I surveyed my patients post-surgery, they said that the nose line, which we install to let out gas or residue until the intestine recovers, was the most painful. So I got rid of the nose line in certain patients who agreed, and compared the results with the ones who had a nose line. There was almost no difference, so I again reported this to many medical journals. Many first raised questions of safety, but according to 2005 records by one stomach cancer association around 30 percent of surgeons were not setting up nose lines in patients’ bodies.

As a result of your challenge?

Nose lines had been used for around 100 years. No one ever tried to not use them until me. Medical books explain many confirmed theories. However, it is always possible to rewrite the books, and that can be anyone, including myself.

I usually arrive at the hospital around 6:30 a.m. First thing in the morning I read newly published dissertations and take care of administrative work. My first surgery usually starts around 8:30 a.m. and lasts until around 10 a.m. After then, I make my rounds and perform another surgery. In the afternoon, depending on my outpatient consulting schedule, I either see patients in my office or perform my third surgery of the day. In total, I perform around 12 to 13 surgeries per week.

Have you had any personal crises serving as a surgeon?

I had a cataract five years ago. My vision in both my eyes was blurry. I was afraid I would be laying on an operating table instead of standing by it, and my surgeries were delayed about two months. I got an operation one eye at a time, and in the meantime I performed an operation on a stomach cancer patient as well. Whenever I face an obstacle, I try to consider another chance to improve myself.

Is there a particular reason you became a doctor?

My dad, who was an engineer, suggested I become a doctor. To him, being a doctor seemed relaxed and financially stable. I was not a devoted medical school student until I started my third year and I dissected a human corpse. I felt I was becoming a doctor as I held that mess in my hands. That was the reason I chose to be a surgeon.

Surgery is not a very competitive field.

These days, medical students choose their medical specialty based on stability and security. Therefore, not that many students dream of becoming surgeons anymore. I think all the departments are important, but it is not right that the departments that directly affects human lives is short of talented doctors.

Is there any motto that you have followed throughout your career?

Not to sidetrack too much, I like the term “in the beginning.” To the specialized doctors, I always say, don’t forget the goal you thought of upon applying for your first job, and to fellow professors I say, never forget the first time you stood on the podium.