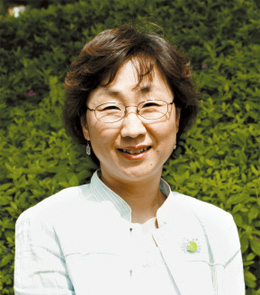 Yoo Gyeong has organized one of the more unusual film festivals in Korea - the Dying with Dignity Film Festival.

The 50-year-old instructor said the goal of the festival, which opened Wednesday and closes today, is to build on renewed public interest in this subject.

“In the past, the mere mention of death was enough to make elders angry with you,” Yoo said, “But in the recent years, an increasing number of people are expressing interest in dying with dignity. It is my hope that people will come to the festival to talk with one another about the relationship between life and death and how, in the face of death, each person’s life and relationships inevitably change.”

Yoo, who joined CBS - a Korean radio and television network - in 1983, said she gained greater awareness of social welfare issues when she took on a radio program called “Hello Grandma, Grandpa.” She left CBS in 1990 and went to Ewha Womans University’s Graduate School of Social Welfare, building on previous training as a hospice care worker. She began giving lectures on dealing with death in 2006. The Dying with Dignity Film Festival is a culmination of her work.

The festival is hosted by Kakdang Social Welfare Foundation and features such films as “After Life,” “Aeja,” “Human Story” and “The Diving Bell and the Butterfly.”

Meanwhile, the emergence of various death with dignity programs means that Yoo has been swamped with requests for lectures from community centers nationwide. One such program guides participants through such daunting tasks as writing a will, becoming an organ donor and filing a death report. It also includes screenings of movies and plays about death.

“My work is really rewarding when participants tell me that the program gave them a chance to think more about life, not death,” she said.