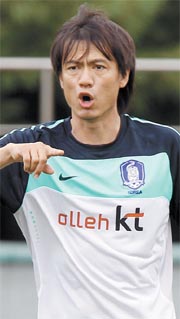 Hong Myung-bo, national football team manager for the Asian Games, is having a difficult time coming up with a final roster for the 2010 Guangzhou Asian Games.

While the baseball and basketball teams were announced earlier this week, Hong is expected to release a preliminary 25- to 26-man roster today, with the trimmed and final 20-man roster ready within a few days. There are many reasons for the delay.

Hong has maintained he will assemble the best team possible with the core members of the U-20 World Cup and three wild card players or players older than 23.

The biggest problem is with overseas-based players. Midfielder Ki Sung-yueng of Celtic FC is at the center of the controversy. If the 21-year-old participates in both the Asian Games in November and Asian Cup in January, he will likely miss more than two months of Scottish Premier League play with Celtic.

Having joined Al Rayyan in the offseason, Cho’s lengthy absence will not be welcomed by the Qatari club. Cho is expected to speak to his manager upon returning to Qatar this week.

Some players face a tough decision because they can earn exemptions from mandatory military service if the Korean team wins gold in November, but because the Asian Games is not a FIFA-sanctioned event, national team managers cannot force professional teams to release players for the event.

On the other hand, senior national team manager Cho Kwang-rae is free to select any players he wants for the FIFA-sanctioned Asian Cup. The tourney is also an important opportunity for players who are eager to cement their place on a squad led by a new manager looking to shake up the roster with several position changes.

Hong is expected to include veteran goalkeeper Jung Sung-ryong and midfielder Kim Jung-woo on the preliminary roster before making any final decisions.

Further complicating matters for Hong are J-League-based players who are not receiving much playing lately.

“I’m worried about the players who are not receiving any playing time with their respective teams,” Hong said. “I plan on going to Japan to evaluate such players after the preliminary roster is announced. Depending on their status, the makeup of the wild card players can change.”

Players like Seo Yong-deok of FC Tokyo and Jung Dong-ho of Yokohma played well at the U-20 Egypt World Cup last year but have failed to adapt to the J-League so far.

Hong also stated that his intention for selecting the current Asian Games squad is with the broader goal of developing a young group of players for the 2012 London Summer Olympics.