Pyo may be old, but he’s still at peak form

Pyo may be old, but he’s still at peak form 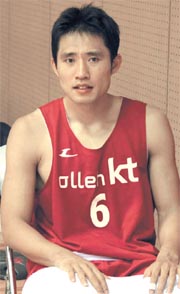 TOYOKAWA, Japan - KT Sonic Boom’s veteran point guard Pyo Myung-il is still performing at his peak despite being 35-years-old. Entering his 13th season, the veteran guard inked the most lucrative contract of his career during the offseason with the Busan-based club.

Pyo was a first round pick with Kia in 1998 and recently parted ways with the Dongbu Promy, rejecting his former team’s 200 million won ($170,800) offer, signing a deal worth 390 million won with 50 million won in incentives in the upcoming season to become the highest paid player on the Sonic Boom.

It’s a significant increase from the 160 million won he earned last year. While most players his age contemplate retirement, Pyo is eager win a title with KT.

“A lot of the younger guys around the league tell me that I look more physically fit than in years past,” said Pyo at KT’s preseason training camp here in Toyokawa. “I have consistently worked to maintain a healthy body. In the past, I’ve tried juice extract of black goat but I’m into eels as an energy boost nowadays. I try to work out when I have the time.”

Pyo was a solid contributor averaging 6.5 points and 4.1 assists per game for a Dongbu squad that finished fifth in the 10-team league, with a 33-21 record.

Despite being happy with such a lucrative contract so late in his career, Pyo is aware of the skepticism that comes with the territory.

“I don’t want to be labeled as a free agent bust,” Pyo said. “In order to avoid that, our team needs to produce a better record than last season. I have no intention of chasing after personal goals.”

“When I joined Kia as a rookie, I thought Kang was the top point guard, hands down,” Pyo said. “But when I teamed up with Lee after completing my two-year mandatory military service, I was convinced Lee was the top guard in the league.

“The two had very contrasting styles of play, which makes it difficult to compare. Kang was a flamboyant player and Lee had a charming style of his own. On a personal level, I think my style of play has been influenced by Lee.”

Known as a rough and physical player, Pyo has played against his share of talented guards. He points to Kim Seung-hyun of the Orions and Jeon Tae-pung of KCC as the top guards in the KBL today.

Pyo won’t have much trouble fitting into KT’s system.

Although new to the team, Pyo played for KT head coach Chun Chang-jin when Chun led the Dongbu Promy. Pyo is looking forward to the reunion.

“I was mostly a sixth man before the coach began inserting me into the starting five,” Pyo said. “He opened up a new basketball career for me.”