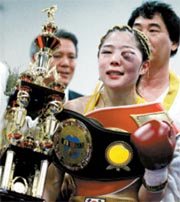 A battered and bruised Kim Ju-hee successfully defended her titles and added another to bring her light flyweight titles to four.

The two fighters came out aggressive, trading blows from the early rounds of the 10-round match. Kim landed her share of shots but also exposed herself to shots from her opponent. Kim’s left eye was swelled shut in the latter stages of the match. However, she persevered and with Nagawa looking fatigued in the late rounds, Kim earned two votes to one draw from the judges. The win improves Kim’s record to 14 wins, one draw and one loss with six knockouts while Nagawa dropped to six wins, one draw and eight losses with two knockouts.

“This was my first fight in a year and it took me some rounds to back into the right frame of mind,” Kim said in a post-fight interview with Yonhap. “I think that by struggling through some tough fights, I can grow and mature as a boxer.” Kim also became the first female boxer to win six titles in a single weight class. Kim’s previous fight came against Papratan Luksaikong of Thialand in Anyang in May 2009. By winning the bout via a fourth round technical knockout, Kim secured the WIBF, WIBA and GBU titles. She was named the WIBA, WIBF and GBU Fighter of the Year last year.