As the ump sees things, he’s not such a bad guy

As the ump sees things, he’s not such a bad guy 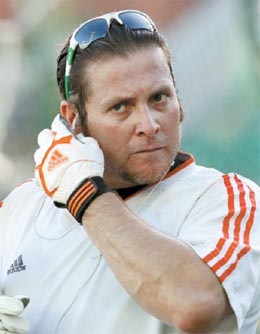 Lotte Giants outfielder Karim Garcia isn’t such a bad guy after all.

A day after KBO’s disciplinary committee handed the Mexican outfielder a seven-game suspension and a three million won ($2,500) fine for arguing a call and making a threatening gesture last week, a KBO umpire has come to Garcia’s defense.

“We’re in no position to judge the penalty handed down by the KBO,” said KBO umpire Moon Seung-hoon. “Since we get along with Garcia well, it’s regrettable to see that the situation has come to this.”

Garcia was tossed from the game against the Samsung Lions Sept. 8 when he argued a strike call and pointed his bat threateningly at the home-plate umpire.

In a similar case earlier this year, Garcia was tossed from a game against the Kia Tigers on May 20 and later warned by the league.

After the latest incident, Garcia received another warning from league officials after he posted a Twitter message stating the officiating in the KBO was “terrible” and called the league’s front office “stupid” for its decision to suspend him.

“I don’t have any personal feelings towards Garcia,” said Lee Min-ho, the umpire who tossed Garcia from the game Sept. 8. “Even though he tends to complain a lot, it’s part of the game so it didn’t bother me. But I was a bit startled when I saw him raise his bat. I considered it a threatening gesture and that’s why I decided to toss him from the game.”

“Garcia did not act out in violence against the umpire,” said LG Twins pitcher Shinya Okamoto in an interview with Ilgan Sports. “In Japan, unless the player struck an umpire, such a severe penalty would never be handed down by league officials. Having said that, I don’t think the umpire acted in a discriminatory manner toward a foreign player.”

But once the league’s front office got word of Garcia’s Twitter post, it began discussing the possibility of further penalties. Garcia released a public apology for his “momentary lapse in judgment” and for having responded in a “negative manner to officiating.”

Prior to Lotte’s game against the SK Wyverns Tuesday night, Garcia made a formal apology to the umpires as they were prepping for the game.

“I will consider Garcia’s apology to the officiating crew on Tuesday night an apology to all umpires and officials of the KBO,” Lee said. “Lotte has advanced to the postseason. I hope Garcia can use this experience as a stepping stone to mature his game and produce for his team in the playoffs.”

Said Moon: “Honestly, most batters complain about calls. The problem with Garcia stemmed from the fact that he made a threatening gesture towards an official. If he had merely complained there would not have been a suspension or fine.”