New leader at Dongduk U.

New leader at Dongduk U. 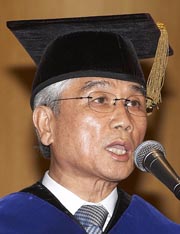 Kim Young-rae, 64, was inaugurated as the seventh president of Dongduk Women’s University yesterday.

Kim was a professor at the social sciences college at Ajou University, in Gyeonggi, and a co-leader of the political manifesto movement in Korea.

Kim wrote numerous books on Korean politics and global governance, and earned his doctorate in political science at Yonsei University.

In his inaugural speech, Kim announced he would establish “Dongduk Vision 2020” and transform the school into one of the three major women’s universities in Korea.