Going for 3rd gold in volleyball at Asian Games

Going for 3rd gold in volleyball at Asian Games 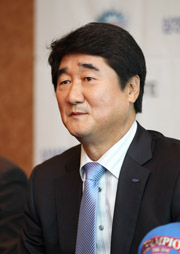 At the upcoming Asian Games starting Nov. 12 in Guangzhou, China, the Korean men’s volleyball team will try to do something no other Korean ball-sports team has ever done - win a third consecutive Asiad gold medal.

Pardoning South Korea’s third-place finishes at the past three Asian Championships, Shin said a third Asiad gold will give South Korea a 12-year reign as the continent’s volleyball power.

Shin told Yonhap news agency that he is confident his team can beat regional rivals.

Iran has emerged as one of the volleyball powers and is a strong favorite for the gold in Guangzhou, and may present the biggest threat to Korea’s bid to win its third consecutive gold.

“Iran is one of the strongest candidates for gold, that’s true,” Shin said, also forecasting that South Korea, Iran, China and Japan will grab the semifinal tickets at the November tournament.

Since men’s volleyball was added to the Asian Games at the third edition in 1958, only South Korea, Japan and China have ever won the gold.

Iran, which lost to Korea and settled for silver at the 2002 Asian Games and was runner-up to Japan in last year’s Asian Championships, may end that East Asian dominance, Shin said.

“Apart from East Asian countries such as Japan and China, Iran has many Europe-born players in its squad. They have power and speed,” the coach said.

But Shin has good memories of excelling against Iran.

“Actually, their performance depends a lot on conditions, with ups and downs competition by competition,” he said. “Two years ago, my team played Iran in a competition, and we won two games and lost one. And the current Iranian squad consists of many of the same players from two years ago.”

Korea has set up a special training program, targeting Iran before the Asian Games.

“We will train in France in mid-October to prepare for matches against Iran,” said Shin, also the coach of the four-time Korean pro volleyball league champion Samsung Bluefangs.

“French clubs there have a similar style to Iran. Warm-ups with them will be a very good exercise before the important tournament. Then I could map out a strategy to rout them.”

Shin said his 12-man team, which assembled on Wednesday, has a good combination of veteran savvy players and youthful energy.

The team leaders are Choi Tae-woong, 34, recognized as the best setter in Korea, and Yeo Oh-hyun, 32, a skilled defensive player.

On offense, more youthful players including 20-somethings Moon Sung-min, who once played in German and Turkish leagues, and Park Chul-woo, are ready to come to the forefront.

“The veteran players will play a role in defense, and younger players will be in charge of posting aggressive, destructive attacks,” Shin said. “A well-balanced team.

“If we prepare well until the tournament and players concentrate on training and games, the gold medal will not elude us.”

This year’s Asian Games mean a lot to Shin, who took the helm of the team in 2002 to start the gold-medal streak.

“Three straight victories have to be achieved over 12 years. It’s not easy to win three golds at quadrennial tournaments,” he said. “I was the coach for the first gold medal at the 2002 Asian Games. Now I want to put a period on the rally this year at Guangzhou.”