SK wins it big in slugfest

SK wins it big in slugfest 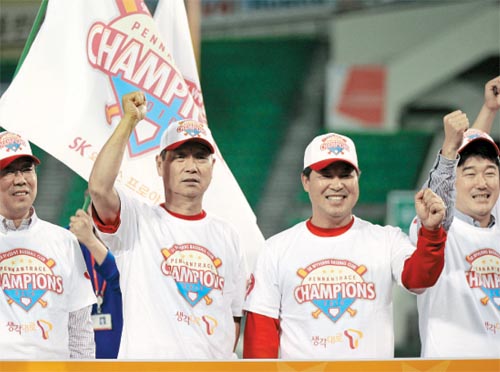 SK Wyverns manager Kim Sung-geun, second from left, and his coaching staff celebrate after winning both their double-header games against the Doosan Bears to clinch first place in the KBO. [YONHAP]


The SK Wyverns managed to secure a place in the Korean Series yet again by clinching the top stop during the 2010 KBO regular season on Wednesday night. SK has now advanced to the Korean Series in four consecutive seasons, becoming only the second team to do so since the Haitai Tigers (now Kia) did so between the 1986 and 1989 seasons.

Playing a double-header against the Doosan Bears on the nation’s biggest holiday, SK delivered two big wins for their fans to clinch first place in league play on Wednesday night.

SK pulled off an impressive 10-4 win in the first game and then followed up the effort with an 11-8 slugfest - in which the two teams combined for five home runs and 19 total runs.

SK got off to a dominating start to the season by stringing together a 16-game winning streak from April 14 to May 4.

Although Samsung and its dominant bullpen made a surge in the late stages of the regular season, SK managed to maintain its place atop the league standings since mid-April.

“It was a tough finish to the season,” said SK manager Kim Sung-geun in a post-game interview. “I think we were able to overcome the difficulties because of our experience over the past three seasons.”

Kim was named the manager of SK in 2007 and immediately helped the club to the top. Having won back-to-back titles in 2007 and 2008, SK finished second behind the Kia Tigers last season and advanced to the Korean Series before going on to lose to the Tigers in a dramatic seven games.

The experience of coming up short in the finals can be mentally draining and can have a carry-over effect on the players in the following season.

“Between Sept. 14 and 15, we lost both games against the Lotte Giants in Busan and after tying the following game against the LG Twins in Jamsil, that was our toughest stretch of the season,” Kim said.

“We were short on pitchers at the time but our players played well to overcome the obstacle. The veteran players were a big help during the tough stretches in the latter stages of the season.”

SK will get a big boost from its ace Kim Kwang-hyun, who missed last year’s postseason with a broken bone in his throwing hand.

The southpaw pitcher leads the league with 17 wins and boasts an impressive 2.27 ERA.

The 2010 KBO regular season comes to a close on Sunday and this year’s postseason pits the fourth-place Lotte Giants and third-place Bears in the first round starting Wednesday, with the winner advancing to face the second-place Lions.

“I will take some time to decide whether to give my players some time off at the end of the regular season or to start training for the Korean Series immediately,” said Kim Sung-geun. “It’s a bit early to talk about which areas to focus in our preparations for the postseason.”