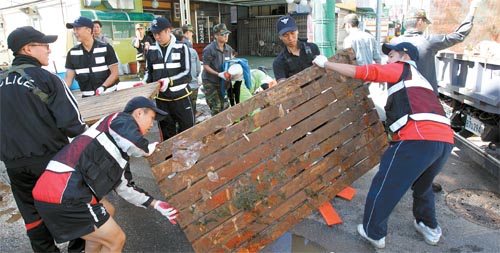 Soldiers and policemen help clear debris from houses inundated by torrential rain in Hwagok-dong, Seoul, yesterday. In response to the unprecedented heavy rain in late September, the worst in 102 years, the government dispatched policemen, soldiers, civil servants and firefighters to damaged areas for recovery work. Below, a satellite image from Tuesday shows a dense rain front concentrated around the capital area. [YONHAP]

Seoul was drenched with 100 millimeters of rain per hour Tuesday. The government estimates one fatality and one person missing. The total number of people badly affected by the torrent was estimated at 11,919.

According to government statistics, the number of damaged houses in metropolitan regions was estimated at about 14,000. 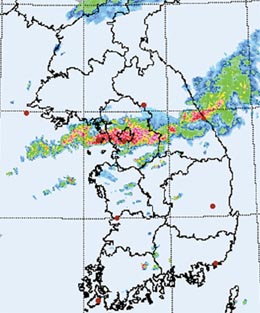 “We have seen some climate changes recently and we should not make plans based on the past weather records,” Lee said. “We have to take preventive measures against disasters breaking out from now on after inspecting the overall system of housing and sewage in cities.”

The president visited three houses in Sinjeong 1-dong - the most battered area in Seoul - on the second day of the holiday with the district leader and the mayor of Seoul.

“I really appreciated the soldiers pumping water out of my house,” said a 54-year old woman living in a basement apartment in Seoul. “I was really sorry not to even serve them a cup of coffee because we have no gas now.” 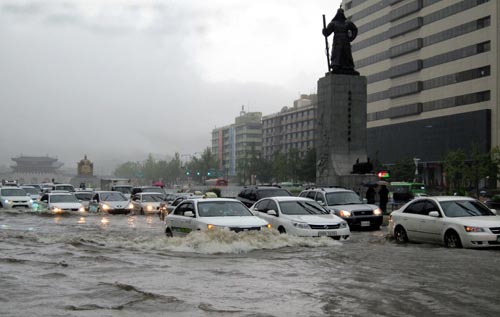 Cars push their way through flash floods on Tuesday at Gwanghawmun Plaza in central Seoul, which saw 100 millimeters of rainfall per hour. [NEWSIS]


In Sinjeong-dong, residents and police worked together to clear flooded residences, and said they needed more help because the damage was so widespread.

“I definitely need a disinfection service from the government because I saw sewage flowing back from a sinkhole in the kitchen and a drain in the bathroom as well,” said a 43-year old woman living in a basement apartment in Sinjeong-dong.

According to Yonhap news agency, Incheon, where 263 millimeters (10.35 inches) of rain was recorded on Tuesday, dispatched 2,500 civil servants for drainage, cleaning and disinfection services.

“I am speechless because the place is so devastated,” said a resident in Gyeyang District, Incheon, in an interview with Yonhap yesterday.

According to Yonhap, an embankment near an apartment collapsed and damaged nine automobiles in Gyesan-dong, Gyeyang District, Incheon. More than 100 policemen and civil servants removed the broken embankment and replaced it with a temporary one made of dirt and sandbags.

Gyeonggi Province, where the rainfall was 98 millimeters per hour, sent 4,000 workers to give relief to 2,777 households. The Republic of Korea National Red Cross provided 571 sets of medical and relief supplies to residents and lent vehicles to be used for meal services. In Gangwon Province, which had 89 people stranded by floods, the air force dispatched troops to remove water and sand from homes.

Some of the public blamed heavy damage from flooding - which they called “water bombs” - on the late response to the emergency by civil servants.

“We had difficulties in calling civil servants who were outside of the city for the holidays,” said an authority in the Disaster and Safety Management Office. “But we stayed all night to do the draining work and finally finished all jobs today.”

Questions were raised about the drainage and sewage system for Gwangwhamun Plaza in central Seoul, which was drenched with 259.5 millimeters of rainfall on Tuesday - the most rain on one day in 102 years - and where sewage flowed out of the drains.