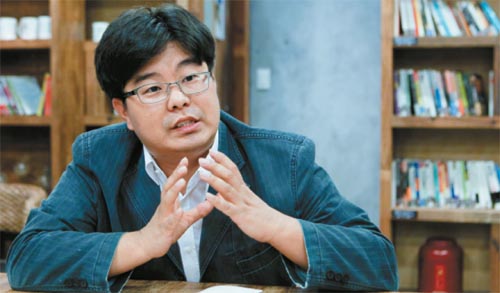 
Jeong Jae-seung, a professor in the bio and brain engineering department at Kaist, grew up dreaming of being a scientist, and he was lucky enough to grow up to live his dream. But he believes his fate was determined not by fate but by urban living. Jeong lived in the city and had access to museums and teachers specializing in various scientific fields. As he realized when he grew older, his peers in the countryside were not so lucky.

Today, he believes he would not have become a scientist had he not been introduced to the subject as a youngster and he has a new project that attempts to replicate his urban experience for students in rural Korea.

“When you meet other scientists, you discover they’ve all had their own experiences with the marvels of science. That is why they become scientists in the first place,” Jeong said. “Being a scientist is not as attractive when you don’t have that sort of enlightenment. It is important that every student has the chance to know that a life of research has meaning, even if no one notices.”

He put out a call for volunteers for the project, “Scientists in small towns,” by posting a message on Twitter earlier this month.

The message, uploaded Sept. 4, read: “A child who has experienced the marvels of the universe, nature and life gets more out of life. But it is difficult for those who live in smaller towns to hear scientists speak. I am planning to do a lecture series with scientists and engineers at city and county libraries in towns with populations of less than 200,000. I hope that professors, researchers, graduate students who wish to contribute their talents to this cause, libraries that want to host an event or companies who want to provide funding will contact me.”

The response was overwhelming. Within days, more than 14,000 people had signed up as followers (@jsjeong3).

A week later, Jeong hosted a meeting for respondents at a cafe in Gangnam, southern Seoul. It was attended by around 30 people, none of whom were scientists but all of whom had a deep desire to help.

Jeong started by telling the story of his first trip to the National Museum of Korea when he was in middle school.

“The professors talked about how Africans made a very special culture of their own based on their environment and it came as a shock to me. It is natural for cultural anthropologists who examine the lives of humans but as an eighth grader, it was something very new,” he said.

“Today, middle school students don’t have many chances to learn about science and cultural anthropology and I want to bridge that gap. That’s when I posted the message on Twitter.”

In the beginning, he enlisted a few colleagues and started to conduct lectures at small city libraries a couple of times a year.

“Students from rural areas who were living an hour away from the city came and they were amazed because it was the first time they had met a scientist,” Jeong said. “I was receiving hundreds of requests from libraries nationwide so I turned it into a volunteer project with minimal costs but maximum benefit.”

When he started the project, he thought he would only get a few responses and he would just pay for the lecture and transportation fees himself.

Within a couple of hours of posting his first call for volunteers, however, over 300 graduate students, doctors, scientists, and teachers had offered to volunteer their time and talents.

The next lecture series will take place on Oct. 30 from 2 to 5 p.m. at libraries nationwide. There will be three to four lecturers per group and each lecture is 30 minutes in length.

Around 80 volunteers are scheduled to participate in the event and about 30 libraries will host this project. Various visual effects such as slides will be used to enhance the presentation and keep middle school students engaged.

The professor hopes the project can continue as an annual event.

“I want the last day of October to be designated a ‘Day of Giving,’” he said. “The idea is that, of the 365 days in the year, we take 364 days to make money using our God-given talents and devote one day to using those talents for society.”