For U-17, quick rise from no good to great

For U-17, quick rise from no good to great 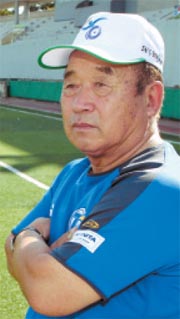 Women’s football in Korea has come a long way since the sport first formed in Korea in haste three months prior to the start of the 1990 Beijing Asian Games. In 20 years, the U-17 squad delivered Korea’s first title at a FIFA-sanctioned tourney with a win at the 2010 U-17 Women’s World Cup on Sunday.

The win came on the heels of a third-place finish for Korea at the U-20 Women’s World Cup last month.

Dust off the old footage of the original women’s national team and football fans will discover the beginning was nothing short of disastrous.

Managed by former national football team player Park Kyung-hwa, 71, the team frequently lost to boys’ elementary teams by a margin of four to five goals in practice games. Korean Olympic Committee officials considered getting rid of the team but Park and his team persevered.

Park vividly recalls the first time he laid his eyes on his players at a football field on Korea Military Academy campus in Taeneung, northern Seoul.

“When I ordered some of the players to tackle opposing forwards, one of the players shot back, asking if it wasn’t against the rules,” Park said. “I was asked to take these novice players to the Asian Games in three months. I lost a lot of sleep worrying about the team back then.”

Despite being a veteran manager, it was difficult for Park to coach female players. Park recalls how one of his starting players disappeared during a practice game in Jinhae, South Gyeongsang. It was only after he got an explanation from another player that he realized the player had been going through her menstrual cycle.

“We now have proper training programs for women, but we did not know how to handle female players back then and it led to several comedic episodes,” said Park.

An accomplished football manager who led the Korean Naval Academy to a national title in 1971 over heavyweights like Korea University, Chung-Ang University and Konkuk University, he also served as an assistant coach under Mun Jeong-sik’s men’s national team in 1976. Park has the distinction of being the first Korean to study with FIFA Coaching Courses. Despite Park’s credentials, three months was not enough time to get the ladies prepared for more experienced and skilled players.

In what went down as the first international friendly played by the Korean women’s national squad, Japan demolished the inexperienced Korean side 13-1 shortly before the 1990 Beijing Asian Games. And at the Asian Games itself, Korea ended up losing to North Korea, Japan, Taiwan and China to a total of 30-1. But the team did go on to beat Hong Kong, 1-0.

The results were near miraculous considering the team was made up of a mix of athletes from field hockey, fencing and javelin teams.

“I got the sense that we were halfway toward our goal and had hope that we could become a top contender in Asia in a short span of time,” said Park.

Although the team escaped the dangers of disbandment, Park faced another questionable decision from the hierarchy. A month after the 1990 Asian Games, a home and away women’s football series was planned between North and South Korea. Government officials pressured Park to include six well-spoken and good-looking university students on the team. Park had to make the difficult decision to drop six high school players from the 17-member Asian Games squad. Park voluntarily stepped down from his post after the series.

“I said at the time that if Korea was to win the World Cup, our women would be the first to do so.”