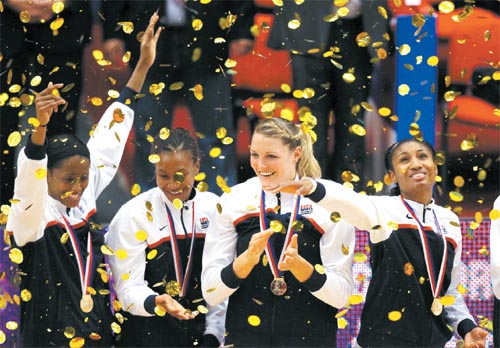 The U.S. team celebrates with their gold medals at the end of the women’s FIBA World Basketball Championship in Karlovy Vary, Czech Republic on Sunday. [REUTERS/YONHAP]


KARLOVY VARY, Czech Republic - The United States hammered home their domination of women’s basketball here on Sunday by claiming the world title for the eighth time.

The U.S., winners of the past four Olympic titles and unbeaten during these championships, recaptured the gold they last won in 2002 by beating hosts the Czech Republic 89-69 in the final.

“These last few days of competition have been incredible,” said U.S. coach Geno Auriemma. “The second and third best teams in the world, Australia and Russia, were eliminated in the quarterfinals. No one could have predicted that.”

Auriemma added: “The Czechs played with enormous passion and intelligence. To beat the Czechs at home makes this victory even more special.”

The Americans led all the way, holding a 40-28 lead two minutes before the break, only for the hosts to claw back to 40-35 thanks to the efforts of Hana Horakova (12 points, five assists) and Eva Viteckova (seven points, five rebounds), bouyed by the vocal crowd of 6,000 at KV Arena.

The Olympic champions, however, reasserted their advantage three minutes after the break, thanks to stalwarts Sue Bird (11 points five steals) and Diana Taurasi (16 points, two steals) as they opened up a 20-point cushion that they maintained for the rest of the match. The top U.S. scorer was Angel McCoughtry with 18 points. She also added four rebounds.

“This entire tournament has been a dream for our team,” said Czech captain Horakova. “We fought all the way. We were beaten by Russia and Spain but we showed that we had a good team.

“We had huge support, that really helped us. This silver medal is an enormous reward.”

Czech coach Lubor Blazek hailed his side’s efforts as they achieved their best finish since 1971.

“This medal is a big success for us,” Blazek said. “The fact that we had the chance to play the best team in the world is reward for our work.

“We’re happy to have brought Czech basketball to this level.”

As the only unbeaten team in the tournament, the U.S. averaged an impressive 96 points per match, and during their nine games held off their rivals by an average 35 points.

“This is probably the hardest competition to win with nine matches to play in 11 days,” said U.S. player Diana Taurasi.

Earlier, Spain claimed the bronze medal when they beat Belarus 77-68.

Defending champions Australia was eliminated in the quarterfinals by the Czech Republic and achieved their worst result since 1998.

They finished fifth after their 74-62 win over European champions France.

Korea lost to Russia 87-76 in its final game yesterday to finish eighth overall in the tourney.

Having advanced out of the group stage for the first time since 2002, Korea lost to the United States 106-44 in the quarterfinals.