Test of offense vs. defense

Test of offense vs. defense 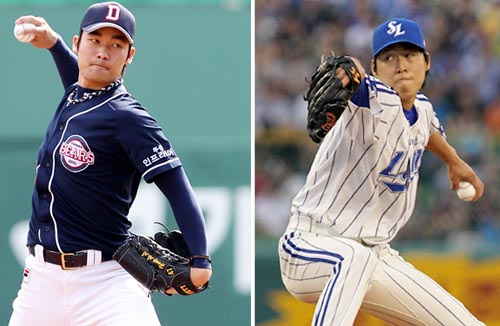 
It will be a matchup of offense versus defense in the second round of the KBO playoffs.

The best-of-five series, which starts tonight in Daegu at 6 p.m., will feature a strong Doosan Bears lineup and the stifling pitching of the Samsung Lions

In the opening game of the series, Samsung will start Jang Won-sam, while Doosan will most likely go with Hong Sang-sam.

Jang has been the clear ace for Samsung throughout the season while Hong last pitched in game three of the first round on Oct. 2 and will pitch with five days of rest.

Samsung acquired Jang from Nexen during the offseason and the 27-year-old went 13-8 with a 3.46 ERA this season.

“I’m 4-0 against Doosan this season,” Jang said. “I pitched well against their left-handed batters. I pitched in the playoffs for Hyundai Unicorns in my rookie season in 2006. I’ve had to settle for watching the postseason on television the past three seasons and I’m looking forward to the opportunity to pitch in the postseason again.”

Doosan’s Hong is expected to be in top shape coming into the game.

Although he gave up four runs in four innings on Oct. 2, it was against a potent Lotte batting order. In three regular-season games this year against Samsung, Hong posted one loss and a 6.00 ERA.

“I have not pitched particularly well against Samsung this season,” Hong said. “Unlike in game three of the first-round series, I feel secure in knowing I have strong bullpen support. My struggles against Samsung in the regular season were because I was not in top shape at the time.”

Doosan will have to score early in order to have a shot at winning.

Samsung, which finished the regular season with the second-best record in the league, boasts a stingy bullpen featuring Ahn Ji-man, Jong Hyun-wook and Kwon Hyuk.

The Lions bullpen has a league-leading 3.35 ERA and is nearly flawless when protecting a lead after the fifth inning. When leading after five this season, the bullpen has lost just twice and won 53 consecutive games at one point.

Whereas Samsung lacked strong starting pitching in years past, it acquired Jang Won-sam late last season and Cha Woo-chan finally developed into a serviceable pitcher, recording 10 wins during the season.

Doosan already proved it has the firepower on its offense to give any team fits. In the first round, the Bears managed more than 10 hits in four of its five games against Lotte and had a .337 team batting average.

Doosan completed the regular season as the second-best offense in the league next to Lotte and also boasts five Korean players with 20 home runs or more, the most ever in the history of the KBO.

Catcher Yong Deok-han, who played backup to Yang Eui-ji during the regular season, emerged with solid leadership behind the plate and clutch hitting in the first round to win the series’ MVP award.

Meanwhile, Doosan closer Lee Yong-chan was left off the roster for the upcoming series. Coming off a suspension for drunken driving and hit-and-run charges, Lee was initially included on the roster but the Doosan front office opposed and the coaching staff made the ultimate decision to not include Lee.

“It’s difficult to give a prediction on the outcome of the series,” said KBS color commentator Ha Il-sung. “Doosan relies on its offense and Samsung on its mound, to win games.