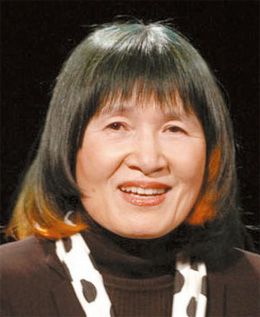 Many Koreans are in grief over the death of TV celebrity and author Choi Yoon-hee, known as the “Happiness Evangelist,” who was found dead with her husband at a motel room in apparent joint suicides, according to police yesterday.

Investigators at Ilsan Police Precinct said Choi, 63, and her 72-year-old husband were found dead. She was lying on the bed while her husband was found hanging in the bathroom at 8:30 p.m. Thursday by a motel worker.

“Given that we found marks around [her] neck in evidence of strangling, we believe the husband helped Choi’s suicide before killing himself,” said Lee Jong-gwan, chief investigator in the case.

In a one-page suicide note that investigators discovered at the motel room, Choi wrote, “I felt something wrong with my body two years ago. I’ve been getting hospital treatment for two years with repeated hospital admission and discharge and it wore me out. I tried not to lose hope but a week before Chuseok, my doctor told me fluid had accumulated in my lung, which made [it] increasingly hard to breathe. I was taken to the ER and I met more despair. I was told something’s wrong with my heart. I didn’t want to stay in a hospital dripped with ... solutions.”

Choi said she had tried to commit suicide alone with sleeping pills, but without success, because her husband reported the emergency and medical personnel found her in time.

“I could no longer bear the pain, and my husband couldn’t let me die alone ... so we decided to leave this world together,” she wrote. “I apologize to people who trusted and loved me.”

Choi, who published 20 books about living happily and hopefully, created a large fan base, ranging from homemakers to businessman, as a TV lecturer who stressed the importance of living with a positive mind-set. Her lectures gained popularity among viewers as she openly shared her own experiences while combining humor with serious messages about life.

Internet users paid tribute to Choi and her husband on local portals.

“In one lecture, Choi said a Korean word, jasal [suicide], reads as salja [live] when we read it backward ... she must have suffered a lot,” one netizen wrote.

There will be no memorial, in accordance to Choi’s wishes. The couple will be cremated Sunday.