Jang looking for gold at games

Jang looking for gold at games 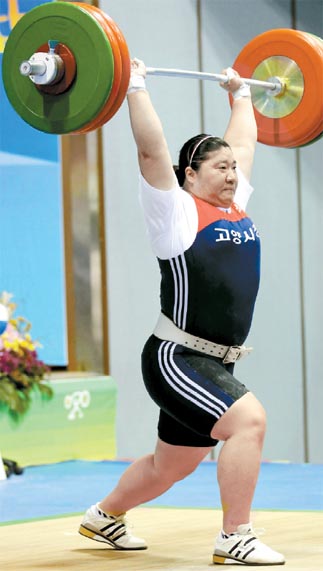 Jang Mi-ran lifts 146 kilograms (322 pounts) in the clean-and-jerk competition of the 75 kg weight division at the National Sports Festival in Geoje, South Gy on Sunday. [YONHAP]

GEOJE, South Gyeongsang - Four-time world weightlifting champion and Olympic gold medalist Jang Mi-ran won the women’s title for the eighth consecutive year at the nationwide competition on Sunday, brightening her prospects of getting a gold at next month’s Guangzhou Asian Games.

Jang came in first in the women's over 75-kilogram (165 pounds) competition with a total of 262 kilograms at the ongoing National Sports Festival here in Geoje - an island off the country's southern coast - lifting 116 kilograms in the snatch and 146 kilograms in the clean and jerk.

“I felt that I've accomplished a small task before heading to the Asian Games. I'm glad that I did not get injured here,” said the 27-year-old Jang.

“Winning gold at the Asian Games would mean a lot. I'll do my best and try to get the best result in Guangzhou,” she said.

Her dream looked out of reach after losing her world championship title in September - which she had held for five years since 2005 - coming in the aftermath of a car accident earlier this year.

She finished third with a total of 309 kilograms, while China’s Meng Suping lifted 310 kilograms in the women’s over 75 kg.

“I lost my balance when competing at the world championships. But now I'm at 80 percent. I'll raise it to 100 percent before the Asian Games,” she said.

Her coach Kim Ki-woong is confident that Jang will succeed.

Before taking the world championship title four times in a row and winning the Olympic gold medal in 2008, Jang had won silver at the Doha Asian Games four years ago.

“Now she's at a recovering pace. Her back ached when she competed at the world championship last month, but she now has fully recovered from the injury,” said Kim. “She feels some pressure, but she is always confident.”

But Kim is not counting out the Chinese.

He said China’s weightlifting champion lifted a more than Jang in her local competition. She, however, has not yet competed on the international stage.

“If she participates in the Asian Games, she would be a strong contender for gold,” Kim said. “But Jang is stronger and will get the Asian Games title.”