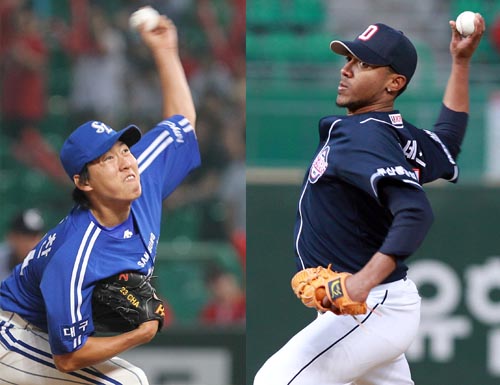 
Just like the first round of the KBO playoffs, the second round will be decided in the fifth and final game. And it’s matchups like tonight’s in Daegu between the Samsung Lions and the Doosan Bears that are usually decided by pitching.

Taking the mound for the Lions will be Cha Woo-chan, while Kelvin Jimenez will get the start for the Doosan Bears.

Strong performances from the starting pitchers will be crucial in the game, as the preceding four games were all determined by a run, depleting both club’s bullpen.

Cha enters the game in good form. In game four, Samsung manager Sun Dong-yeol replaced starter Tim Redding for the southpaw pitcher in the fifth inning with the Lions nursing a 7-2 lead. Redding had given up a hit to Lee Won-seok and Cha was brought into the game to face Doosan’s left-handed batters Jung Soo-bin, Oh Jae-won and Lee Jong-wook. Cha retired all three batters, striking out two in the process, to end the inning. He was replaced in the sixth inning for Kwon Oh-joon. Facing elimination, the Lions would go onto win the game, 8-7.

With the Doosan batting order - loaded with left-handed batters - producing plenty of runs in the postseason, Cha will have to come up big for the Lions.

Cha was the surprise starter in game one and had a mediocre outing, giving up five runs on five hits in four innings. But he is eager to make up for his performance in game one.

“I get angry when I think about my performance in game one,” said Cha. “I was too cautious in my approach. I will boldly compete for a win.”

Doosan manager Kim Kyung-moon announced immediately after game four that Jimenez would take the mound in game five. Although Kim could have waited until yesterday to make his decision, there was no doubt in Kim’s mind as to who would start.

Jimenez won 14 games during the regular season, giving him the most wins among right-handed pitchers in the KBO. He had poor outings against the Lotte Giants in the first round, giving up four runs in five innings in game one with an overall 8.10 ERA in two outings during the series.

But Jimenez has been strong against the Lions. He pitched seven scoreless innings in game two. With a rain delay, Kim had planned on replacing Jimenez in the sixth inning but the pitcher insisted on staying in the game and gave the Doosan bullpen a chance to rest.

During the regular season, Jimenez was particularly strong against Samsung. He posted three wins with a 1.44 ERA and has continued his dominance over the Lions in the postseason.

“I would have to say Jimenez holds a slight edge over Cha in the matchup,” said KBS color commentator Lee Yong-cheol. “Having said that, if the starting pitchers show any signs of struggle they will be replaced quickly so it will be difficult to predict the outcome of the game. Both teams are also hitting well.”

The Samsung Lions will rely on the hot bat of Park Han-yi in game five. In their two wins (games one and four) in the series, Park provided the Lions with clutch hitting. Park was named the most valuable player in both games one and four.

Park enters the game boasting a .471 batting average with six RBI. He served as the team’s leadoff hitter in the first three games of the series and was penciled in as the third batter in game four, driving in the game’s winning run.

The 31-year-old outfielder was once seen as nothing more than a contact hitter but he worked on his power game during the offseason and the hard work has paid off.

“I hit well in the latter part of the regular season,” Park said. “I thought it was important to enjoy the postseason without putting too much pressure on myself.”

Park was slotted in the bottom half of the batting order this season and his numbers improved noticeably. He hit .301 this season, had 11 home runs - the first time he hit more than 10 in six seasons - and also tied his personal best with 63 RBI.

Leading Doosan’s offense will be Kim Dong-joo. The 34-year-old is playing in his 10th postseason in 13 years in the KBO. Having hit in the cleanup spot in all 10 of those years, Kim owns the KBO postseason record for most hits, RBI, runs scored and extra base hits.

Kim had hits in all four games this series, leading all batters on both clubs.