Kim wins sports award as woman of the year

Kim wins sports award as woman of the year 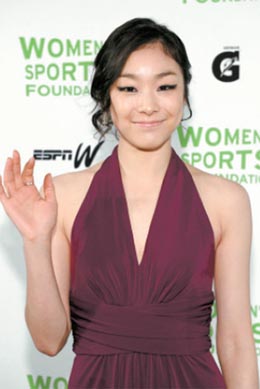 Figure skater Kim Yu-na became the first Asian to earn the Sportswoman of the Year honor yesterday at the 32nd Annual Salute to Women in Sports gala held by the Women’s Sports Foundation.

The annual event, held at the Waldorf-Astoria Hotel in New York City, honored female athletes who have exemplified excellence in their respective fields and have been role models for females worldwide.

The winners were selected based on an online poll held on the WSF Web site based on the performance of the nominees from Aug. 1, 2009, to July 31, 2010. Kim edged out the likes of Sanya Richards, a world 400m runner and Alana Nichols, a Paralympic wheelchair basketball player, to win the Sportswoman of the Year as an individual.

Kim had a dominating season during the span in which she won all three International Skating Union Grand Prix events that she entered and added a gold medal at the 2010 Vancouver Olympic Winter Games in March. At the 2010 games, Kim blew away her competition with a record-setting performance of 78.50 in the short program, 150.06 in the free skate and a 228.56 total.

“For me, this isn’t just any award. As a figure skater, I am glad for this opportunity to bring more attention to the sport of figure skating so that more girls can become interested and inspired to participate in the sport,” Kim said in an acceptance speech, according to her agent AT Sports.

Katie O’Donnell of the University of Maryland’s field hockey team was awarded the Sportswoman of the Year as Part of a Team; Amy Palmiero-Winters, an amputee ultra-marathon athlete, was honored with the Wilma Rudolph Courage Award, for those who exhibit great determination and strength; and Caitlin Baker, a 16-year-old swimmer from Oklahoma was awarded the Annika Inspiration Award.