Two brothers, but one field

Two brothers, but one field 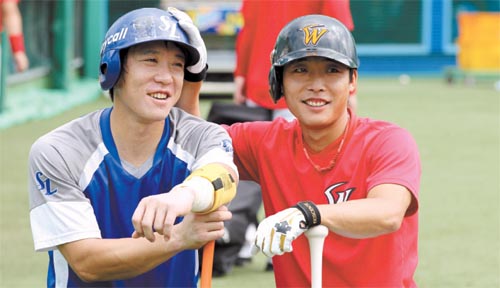 Cho Dong-hwan, right, of the SK Wyverns, poses with his younger brother Cho Dong-chan of the Samsung Lions after a practice in August. By Lim Hyun-dong


Cho Dong-hwa of the SK Wyverns and Cho Dong-chan of the Samsung Lions are brothers.

The two have been playing in the KBO for several years, but have yet to achieve their goal of competing in the Korean Series together - until now.

The table is finally set for the Korean Series as the Lions moved up from round-two play to face the Wyverns in game one of the Korean equivalent to the World Series tonight at 6 p.m. in Incheon.

SK finished first overall in the regular season and in turn, secured a place in the Korean Series. But a place in the finals did not come so easy for the second-seed Samsung Lions.

The tightly contested second-round series came to a thrilling conclusion on Wednesday night when Samsung came back from an early five-run deficit to win the fifth and deciding game in the bottom of the 11th inning, 6-5.

Among the throng of Lions fans in the stands at Daegu Baseball Stadium to witness Samsung pull off a thrilling game-five win over Doosan were Cho In-guk and Cho Jung-sook, there to support their son Cho Dong-chan, 27.

“We could not provide a lot for them,” a teary-eyed Cho In-guk said about his two sons. “They worked hard and supported each other growing up.”

Dong-hwa entered the game as a center fielder in the top of the seventh inning and got a hit in his first at-bat in the bottom of the eighth.

Coincidentally, Dong-chan was selected by the Samsung Lions in the second round of the 2002 Amateur Draft on the very same day.

Tabbed as a hot prospect at an early age, Dong-chan would became a starter in the Samsung infield in 2004, helping Samsung win back-to-back Korean Series titles in 2005 and 2006.

But Dong-hwa suffered a setback in the summer of 2007 when he injured his shoulder. He struggled to find a spot on the starting lineup on a regular basis until this year.

He earned the role of starting third baseman and was even selected to represent Korea at the 2010 Guangzhou Asian Games.

Dong-hwa, listed at 175 centimeters (5 feet, 7 feet) and 70 kilograms (154 pounds) did not attract the type of interest his younger brother received, but his speed, defensive skills and strong work ethic caught the eyes of SK manager Kim Sung-geun. Dong-hwa became a starter in 2007 and has played more than 100 games per season every year since then and also competed in three consecutive Korean Series’ (2007-09), contributing to back-to-back titles in 2007 and 2008.

The two brothers took turns competing in six consecutive Korean Series starting in 2004, but the upcoming series will be the first time the two both play in championship series.

“I’ve always wanted to watch my two sons compete in the same Korean Series,” said Cho In-guk with a smile. “I didn’t think my dream would come true so soon.”

But the two brothers aren’t the only veterans in the Korean series this year.

Another interesting battle will feature two of the most experienced catchers in the league.

Park Kyung-hwan, 38, of SK and Jin Kap-yong, 36, of Samsung were regulars on the national team for more than a decade but this will be the first time the two veterans square off against each other in the Korean Series.

In international competitions, Park helped the national team win bronze at the 2000 Sydney Summer Games and a second-place finish at the 2009 World Baseball Classic. Jin won helped his team win gold at the 1998 Bangkok Asian Games and again at the 2008 Beijing Summer Games.

The series will also feature two managers in SK’s Kim Sung-geun and Samsung’s Sun Dong-yeol who have never faced each other in the postseason.

SK will start their southpaw ace Kim Kwang-hyun in game one tonight while Samsung, coming off a day of rest, will go with Tim Redding.